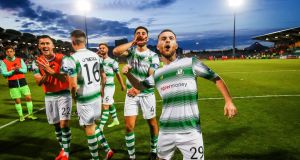 Stephen Bradley believes Jack Byrne is hitting new heights for Shamrock Rovers after a game in which the midfielder’s goal marked him out as a special talent and sent the Dubliners through to face Apollon Limassol.

“What we have to realise with Jack is that he has always had the ability on the ball,” said the still elated manager in the immediate aftermath of Thursday’s dramatic defeat of SK Brann. “Now he is becoming a proper footballer, an all-rounder. He is working for the team, he is respecting the game as a whole now and his quality on the ball is there for everyone to see.

“When we got him,” Bradley continued, “Jack wanted to play when he had the ball and that was it. But you have to respect the game; against good players and good teams you have to earn the right to show your quality. And I just think the maturity he has shown over the last two or three months is making him an all-round, top, top player.

“Jack has had to buy into everything that we are doing, and we have had to coach him the right way. But I understand Jack’s mentality; I was that kid, so I understand where he is coming from. It’s important you know there is a man there behind the player, and you have to connect with the man to get to the player, and that’s what we’ve done.”

The 23-year-old’s quality was certainly there for all to see against the Norwegians with the former Manchester City midfielder again a key influence in his side’s overall play and a decisive figure in the game’s turning point, the home side’s second half equaliser which he finished brilliantly after Dan Carr and Ronan Finn had combined to set him up.

“It reminded me of Paul Scholes at his best, arriving in the box, staying calm and chipping the goalkeeper,” Bradley said of the goal. "That’s a just reward. When we got Jack six months ago, he wouldn’t have run into the box, he would have been deeper as he didn’t trust his legs or fitness.

“Now he is fit, he’s getting in the box and when he is in there, there is no better quality in the country. We’re not finished but we’re getting there; he is becoming a top player.”

The goal was perhaps the standout moment on what Bradley insisted was a special night for the home side and their supporters.

“It was a European night that had everything, really,” said the Dubliner. “It had drama with a late goal, a big crowd, two proper teams going to win the game; it’s what this club is all about. This is what we are trying to get it back to, and tonight was special.”

And the club’s run, he insists, need not be over yet despite the recent defeats suffered by a couple of Irish clubs at the hands of Cypriot opposition.

“Yeah, it’s a tough game again,” he said when asked about next week’s opponents. “We have watched a bit of them already and we’ll watch a lot more of them after the UCD game but I believe we can win the tie. It will be difficult but so was tonight. I believe in the group, I believe they are getting better every week and we can definitely go and win the tie.”

1 ‘A radical departure’: Who are CVC and what are their aims with rugby?
2 Ger Loughnane and the spark that lit Clare’s hurling revolution
3 Ken Early: Champions League has stolen international football’s clothes
4 Connell losing touch with club championship is real tragedy of Normal People
5 Rob Howley opens up about sister’s death and gambling issues
Real news has value SUBSCRIBE
Crossword Get access to over 6,000 interactive crosswords