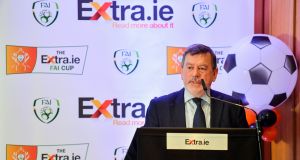 Donal Conway: “There are two serious investigations and a number of other work programmes going on as well. I have been centrally across them for the last number of months.” Photograph: Sam Barnes/Sportsfile

Donal Conway says he understands the concerns of politicians who have called for him to withdraw from his bid to continue as president of the FAI for another year but insisted that the association retains the right to determine how best to get itself through the ongoing political and financial crisis in which it is engulfed.

The 65-year-old says that the association’s board will consider the views expressed by both John Treacy and a majority of members of the Joint Oireachtas Committee for Transport, Tourism and Sport on Wednesday at a meeting on Saturday, observing that “you can’t just disregard what has been said,” and claims he has not completely ruled out departing at Sunday week’s AGM.

He suggests, however, that a time when most of the organisation’s political leadership will have gone and it is said to require more than €10 million in advances from Uefa, up to double that over the next couple of years according to one report, the association has to act to, as its board sees it, protect its best interests.

“There is a lot going on at the FAI,” he said at a media briefing on Thursday initially held to provide an update on the bid to have the Governance Review Group’s recommendation adopted at Saturday’s EGM in Dunboyne.

“There are two serious investigations and a number of other work programmes going on as well. I have been centrally across them for the last number of months. So it’s about what is the most pragmatic thing to do. It’s simply that.

“I was never going to be a four year president [as would have been originally envisaged when he was elected last summer], that is long gone because I am culpable having been a member of the board for a long time.

“In the immediate crisis we could have stood away but we worked through it and considered whether one of two board members could bring any value to an interim board for the last 12 months. All factors have been taken into consideration in making that decision. It’s not a personal decision. It’s a broader decision aimed at doing what is best for the association.”

Conway insisted that the decision has not been taken to “rebuff” or “thwart” either the Minister or Sport Ireland and said that when he had originally told politicians he would go along with everyone else, he meant it. There had, he said, been some “pushback” from members about the apparent surrender of autonomy but that the change of collective heart had been prompted by the perception that some continuity was required.

He quoted Shane Ross at the stakeholder conference in the Mansion House as saying that Irish sports bodies should be entitled to choose their own leadership, said the proposal was in line with the a suggestion by the Governance Review Group and ultimately claimed that any suggestion of direct linkage between public funding and regime change might prompt Fifa to consider suspending the association from membership.

The former schoolteacher insists that the association is anxious to have the five per cent or so of its funding that normally comes from the Government, money he describes as “crucial” to its ability to get back to something more like normal operations.

He said Sport Ireland chairman Kieran Mulvey had suggested getting the new governance rules through would be “the first significant milestone,” on the road to that and expressed cautious optimism that that will be achieved with “a small surplus” to the required two-thirds majority.

John Treacy had suggested to the Oireachtas Committee that the association is currently eating into future television revenues by drawing down money from Uefa in order to continue operating and while Conway described Uefa as the FAI’s “biggest stakeholder” and said that it provided between 20 and 25 per cent of the organisation’s turnover, he insisted Treacy would not know the details of the ongoing talks between the two organisations.

It is, however, widely understood that Uefa has guaranteed funding of more than €10 for next year and that that this money will indeed ultimately be recouped from broadcast deals relating to the national team with an inecitable impact on future revenues.

In relation to this weekend’s vote, he acknowledged that there have been issues relating to individual aspects of the governance report like the allocation of two council members apiece to the professional players and supporters while the meeting of gender quotas, he said, poses a challenge “not at board level but rather as you go down through the structures” due to the relative lack of female involvement in the game.

He was adamant, however, that the proposals come as a package and that there is “no mood to make fundamental change to the document”.

1 Tipping Point: DeChambeau’s transformation raises questions, but who will ask them?
2 Ken Early: Resurgent United can be the top team – in Manchester
3 The Game Changers: How Jonah Lomu’s dramatic arrival heralded rugby’s new dawn
4 Mental clarity in chaos: Novak Djokovic, the man who turned two into three
5 Lewis Hamilton: I was ‘silenced’ over Colin Kaepernick
Real news has value SUBSCRIBE
Crossword Get access to over 6,000 interactive crosswords