Cork win in Luxemburg but come up just short 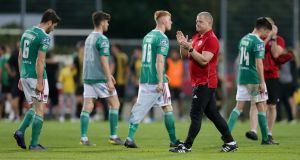 Cork City after their win in Luxembourg, although it’s Progres Niederkorn who progress. Photograph: Inpho

Despite a courageous performance on the night, the European campaign of Cork City FC came to a conclusion in Luxembourg on Thursday evening.

After a bright start, Cork brought themselves right back into the tie in the third minute when Garry Buckley found the back of the net, with a cracking strike on the volley from just outside the box.

City were having the better of the chances and Joel Coustrain had a brilliant opportunity to level the tie up, but his one-on-one effort was saved by Sebastien Flauss in the Progrès goal. Just before half time, Karl Sheppard curled inches over with an effort towards the top corner, while Daire O’Connor saw his attempt saved.

Cork did though level the tie up shortly into the second half. Conor McCarthy was on hand to put the ball home inside the box.

But Progrès would hit the target through a finish by Issa Bah and break City hearts.

Needing another goal at this stage to go through on the away goals rule, Cork went close late on Sean McLoughlin headed over. City did well on the night but came up just short, as Progrès set up a second qualifying round meeting with Rangers.