Sleeping giants: A look at AC Milan as they draw Shamrock Rovers 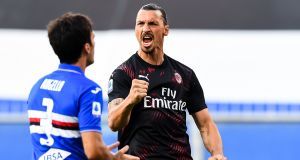 Zlatan Ibrahimovic is reportedly on the verge of signing a contract extension with Milan. Photograph: Paolo Rattini/Getty

Shamrock Rovers have been handed a plum tie in the Europa League qualifiers, as they face seven-time European champions AC Milan in Tallaght.

It is a cruel blow to Rovers and their supporters that the clash will be played behind closed doors, denying them both a full house at home and the chance to visit one of the world’s most famous stadiums - the Giuseppe Meazza.

However, although Milan remain one of the biggest names in world football, the Rossoneri have been in the doldrums for a while now - their last Serie A title, and last piece of significant silverware, coming in 2011.

Regardless, a date with Milan is about as glamorous as it gets for Rovers. Here is a look at their opponents ahead of the qualifier on September 17th.

They must have had some handy players?

Since Massimiliano Allegri’s four-year stint in charge from 2010-2014 Milan have been through a number of managers. Currently at the helm is Stefano Pioli, who took over in October 2019 following the sacking of Marco Giampaolo who lasted just seven matches in the San Siro hot seat.

Milan’s last Scudetto came in 2011, with Juventus hoovering up nine Serie A’s in a row. Last season they finished sixth, finishing ahead of Napoli but behind Juve, Internazionale, Atalanta, Lazio and Roma.

Where did it go wrong?

Milan’s relative decline can largely be linked with issues off the pitch, with the club running up heavy financial losses during the last decade. They are currently American-owned, and have fallen foul of Uefa’s Financial Fair Play rules on a number of occasions. Milan were banned from Europe last season, as punishment for over-spending between 2016-18.

Who have they got on the books now then?

The headlines will focus on Zlatan Ibrahimovic’s date in Tallaght, with the 38-year-old reportedly on the verge of signing a one-year contract extension in Milan.

Aside from Ibrahimovic, Milan’s current squad lacks the star dust of old - that said, they should have enough to account for Rovers in September. Between the sticks they have 21-year-old Gianluigi Donnarumma, who made his first team debut aged 16 in 2015. 25-year-old centre-half Alessio Romagnoli captains the side, alongside Denmark captain Simon Kjaer - a familiar face for Irish football.

In midfield 23-year-old Ivorian Franck Kessie has had suitors in England and he normally lines up alongside 22-year-old Algerian Ismaël Bennacer. The mercurial Hakan Çalhanoglu and dogged Croatia forward Ante Rebic are in charge of supplying Zlatan.

How did they fare after the restart?

Very well. Milan were unbeaten in 12 fixtures on the resumption of Serie A, winning nine of them, including an eye-catching 4-2 win over eventual champions Juve.

When were they last on Irish soil?

Milan’s last trip to Ireland came in 1975-76, when they met Athlone Town in the Uefa Cup. A 0-0 draw at St Mel’s park was followed by a comfortable 3-0 victory at the San Siro.