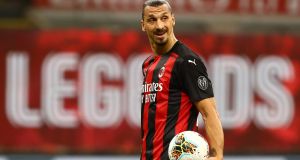 The board and supporters of Shamrock Rovers may feel like they have a lotto ticket with last week’s numbers on it after being drawn to play Italian giants AC Milan at home in the second round of the Europa League.

Any other year, and the tie would represent a financial bonanza for the Dublin club but coronavirus restrictions and related changes to the allocation of broadcast rights mean that there will be next to no money in the game for the Dubliners.

Milan’s international stars, including Zlatan Ibrahimovic, and stellar reputation would ordinarily guarantee a full house for the game in Tallaght on September 17th but instead, the match is all but certain to be played behind closed doors with just a handful of club officials, reporters and those supporters agile enough to scale the wall opposite the Square shopping centre as a few did last Thursday night when Ilves Tampere were in town.

To compound the problem, though, Rovers will not be able to sell the game to Italian television or stream it internationally as Uefa have handed all bar domestic broadcast rights to away teams while ties in their club competitions are being decided by just one game.

“We only have the rights to Ireland,” confirmed club director Mark Lynch, “and so the broadcast opportunities will be limited but we will see what the level of interest is.

“It is unfortunate that we won’t, as a club, be in a position to make more money out of the occasion but from a playing perspective, playing in Tallaght is a good thing, Milan will have to travel and isolate.

“And the draw is a positive in terms of profile both for Shamrock Rovers and for Tallaght. Since we moved there, Rovers have made many more people abroad aware of the area abroad through occasions like the games against Real Madrid, Tottenham, Kazan and it is good to be able to do that again now with Milan. So there is a pay-off here.”

Financially, though, it would actually have been better for the Irish side had they been drawn away as there would have been a travel grant of around €40,000 from Uefa and the potential to sell or stream the game in neutral territories, including the likes of New York, where there might have been significant interest from fans of the Italian side.

Milan were last in Ireland for a European tie in 1975 when they were held to a scoreless draw by Athlone Town at St Mel’s Park, a game that has become part of League of Ireland folklore.

Giovanni Trapattoni was manager of the Italian team for the game which is generally remembered for the visible discomfort experienced by the visiting players both before kick-off when they were obliged to trudge through mud from their bus to the dressingroom and over the course of the game that followed. Milan won the second leg 3-0.

Dundalk, meanwhile, appear to have been more fortunate in the section of the draw reserved for sides who won their domestic titles last season with the Irish club being drawn away to the only available non-seeds, Inter Escalades of Andorra.

No venue for the match, which will have to be moved because of the Covid-19 situation, has been confirmed yet but the club suggested on Monday afternoon that it might be hosted at a ground in Greece.

Matt Doherty’s new club, Tottenham Hotspur, meanwhile, were drawn away to Lokomotiv Plovdiv of Bulgaria while Rangers must play Gibraltar’s Lincoln Red Imps who beat Celtic by a single goal at home four years ago before losing 3-1 in Glasgow.