Joey O’Brien: Shamrock Rovers win ‘is what you dream of’ 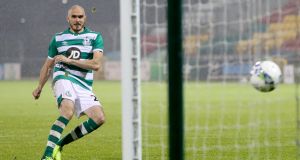 Former Ireland international Joey O’Brien says that for the many highlights he has experienced over the course of his career, scoring the decisive spot kick for Shamrock Rovers in Thursday’s night’s compelling penalty shoot-out success over Ilves Tampere was still a magical experience.

“That is what you dream of,” said the 34 year-old who played almost 150 top flight games during his time in England with Bolton and West Ham. “It is why you play football out in the back garden, (the thought of) scoring a winner or getting a peno in a cup final. I said to the lads during the game: ‘Who is going to be a hero?’ Luckily for me I was the man to take the peno and it went in.”

O’Brien’s winning strike, actually his second successful one of the 26 spot kick marathon shoot-out, was the culmination of a hugely impressive display of character by a team who came twice from behind during the 90 minutes, came through the entirety of extra-time with 10 men and then scored 12 penalties in a row after their first, by Jack Byrne, had been saved. Their reward is a place in Monday’s draw for the Europa League’s next round.

“When you go down to 10 men it was hard work but we are a very fit team and we are experienced,” said O’Brien afterwards. “We managed it well. Sat in and gave up possession and I don’t think they had very many chances when we went down to 10 men. We were kind of hoping to get to penos then and we took care of business.”

Rovers manager Stephen Bradley hailed his veteran defender as “a leader of men,” afterwards. “He was excellent, especially when we were down to 10 men; you could hear him all over the pitch organising things. And we said before the shoot out: ‘we’ve been here before, nice and calm and Alan will save one.’”

Bradley gave huge credit to Alan Mannus for the save he made to put O’Brien in the position to win the tie, although the Northern Ireland international may not have been entirely thrilled that it took him 13 attempts to make a stop with one early on struck directly against the left hand post after he had gone the wrong way.

The quality of the Tampere penalty taking was, to be fair, pretty impressive but perhaps the greatest credit due on the night was the players lower in the Rovers order who kept their side in the shoot out at the do-or-die stage of the proceedings. Bradley insists he never doubted them.

“I don’t think you can worry about them,” said the manager. “You have to trust each and every one of them, even the ones that didn’t put their hands up straight away...you have to believe that they are going to do their job and be calm and confident in what they do. They are good players.”

He was impressed too, he said, by the way the players on the pitch took control of the situation when everyone had taken a penalty and it came around to starting again. With Byrne having missed the very first one, Dylan Watts and Aaron McEneff stepped up for seconds before O’Brien wrapped things up.

“Jack wanted to go again but Dylan wanted to go before him, Dylan’s our penalty taker and he was obviously really confident.

The win is worth €260,000 to the club and comes after European defeats for Dundalk, Derry City and, also on penalties, Bohemians over the past week. The league champions now join Rovers in the Europa League. The next round of games are scheduled for mid-September.