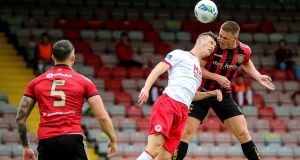 Luke McNally of St Pat’s challenges in the air with Dan Casey of Bohemians during a recent Dublin derby at Dalymount. Photograph: Tommy Dickson/Inpho

The scheduling of Premier Division games will continue to be staggered over the second half of the season, according to recently appointed League of Ireland director Mark Scanlon who says the remaining fixture list should be published over the next week or so.

“We will have that discussion next week in terms of the rest of the scheduling for the season,” said Scanlon, as the association announced pricing for its WatchLOI streaming service for the season’s second half. A pass for all games is set to cost €39 for viewers in Ireland and €45 for those accessing games from abroad, while individual matches will continue to be €5 each to view.

“It was done that way to see how the first couple of weeks went on WatchLOI, and see what the clubs thoughts were as well, and now the scheduling of games is important around European competitions. We have a meeting with broadcasters this week and we hope to give the updated fixture list for the rest of the season towards the end of next week.”

Although no numbers for either subscribers or individual match access were provided, the association says the response to the service has been positive and that it will turn a profit for the clubs this season. Beyond that, the early sense is that it can have a role to play in coverage after spectators are allowed back into games, although the association says there will be a great deal more data to review before any decisions are taken for next season.

The general response to the quality of the coverage has been positive and Scanlon believes that the staggering of games has meant people watching more games.

“In the short term, I think it is actually increasing the numbers of new fans,” he says. “They are enjoying games, they are now seeing five League of Ireland games over a weekend and so the knowledge of League of Ireland clubs, of League of Ireland players, is increasing among fans around the country and hopefully when people are allowed back into stadiums we can convert those people into match goers and increase the number of people who are watching on television as well.”

Meanwhile the game between Shamrock Rovers and Bohemians scheduled for Saturday week will, he insists, go ahead as planned despite a suggestion from the league leaders that they wanted it postponed.

Both clubs will have players away in the days leading up to the game on international duty with the Irish Under-21 squad but after a tweaking of the schedule, Scanlon says that everyone is happy at this stage to proceed as originally intended.

“We have had extra conversations with the clubs and some of the things in the Under-21 situation have changed in terms of when the camp was starting and finishing from the initial correspondence,” he said. “The players will be back at their clubs on the Thursday and they (the clubs) are happy with the arrangements we have in place at the minute.”