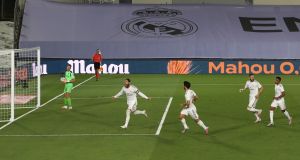 Real Madrid captain Sergio Ramos kept his nerve to score a late penalty and secure a hard-fought 1-0 home win over Getafe on Thursday for a sixth consecutive La Liga victory to take his side one step closer to winning the title.

Ramos coolly passed the ball into the net to break the deadlock in the 79th minute after Dani Carvajal was felled by the trailing leg of Getafe’s Mathias Olivera, who was earlier denied a penalty after being knocked over by Carvajal.

The late strike felt harsh on Getafe, who had squandered a couple of chances to take the lead, but Zinedine Zidane’s side once again saw out a difficult game to capitalise on Barcelona’s 2-2 draw with Atletico Madrid on Tuesday.

Real, who have not won the title since 2017, lead the table on 74 points, four ahead of Barca with five games left and have a superior head-to-head record over the Catalans which would give them the trophy if both teams finished the season level on points.

“Today was like a final for us and that’s how we approached it,” said Real’s Dani Carvajal.

“Getafe caused us plenty of problems, particularly in the first half but we put in a serious performance and are delighted to be taking the three points home with us.”

Madrid were without joint-record signing Eden Hazard through injury and their fitness troubles continued when defender Raphael Varane was forced off in the first half with a head injury. Eder Militao replaced him.

Real’s neighbours Getafe have a reputation for being one of the toughest teams to break down in the league which they certainly lived up to and Madrid struggled to carve out many clear chances.

Their best effort before the penalty fell to Vinicius Jr, who busted a gut to get on the end of a cross but failed to generate enough power to beat Getafe keeper David Soria.

Real’s Thibaut Courtois made an outstanding early save to repel a deflected shot from Getafe’s Xabier Etxeita and watched on as Jaime Mata fired narrowly over the bar after a giveaway from Madrid defender Ferland Mendy.