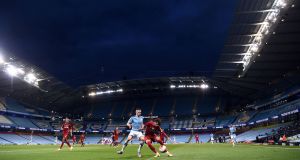 A tricky one, this, for Sky to sell. The Kloppites in their audience wouldn’t have needed to be fired up at all, it being the first time in three decades that their lads had taken to a pitch as champions, so they’d have been tingling. For everyone else, though, ‘Can Manchester City close the gap at the top of the table to just 20 points by beating Liverpool who have already won the League?’ just wasn’t the most tantalising of sales pitches we’ve ever heard for a Thursday night game.

But lest we turn over to the opening round of the Rocket Mortgage Classic in Detroit on Sky Golf, David Jones did his best to convince us that this game was unmissable, recruiting Graeme Souness and Jamie Redknapp to assist him in the effort.

(Incidentally, and this has become a bugbear since Sky Richie Sadlier-ised Jamie last week, can they please stop putting up accompanying captions like these:

Anyway, the evening opened with an emotional montage set to a tune by The Beatles, who, apparently, were from Liverpool, entitled The Long and Winding Road, featuring footage of when they - Liverpool, not The Beatles - last won the league before this time, the footage so grainy it looked like something from Pathé News.

Then it was time for a socially distanced Jamie Carragher interview with Mo Salah, (‘Salah-brations,’ as Sky criminally called it), in which the latter appeared to be isolated in a cattle pen to ensure he’d be a safe two metres from Jamie C, the focus of the chat how motivated Liverpool would be for their remaining games, and how much they wanted to beat the record points total.

Over in Manchester, Kelly Cates asked Roy Keane, who had so many layers of clothing on him you’d think he was heading for Everest base camp, if this class of record-chasing was important. “Nah,” he said, “the League table isn’t on the back of your medal.”

Kelly chuckled, although she seemed in generally good spirits, anyone would think she had Liverpool blood in her.

Match time. David told us we could switch to Sky’s Watch-a-long, starring Adam Smith, Chris Hamill, Shaun Wright-Phillips and Glen Johnson, if we wished, but we said, ‘you’re grand, thanks’.

A socially distanced guard of honour, and we were off.

Are you getting used to these fake crowd sounds? Bill Leslie, who commentated on the preceding Sheffield United v Spurs game, certainly is. It was after United came mightily close to scoring, as if the three they managed weren’t enough to leave Jose looking like he’d just downed a pint of sour cream, that he said: “Half the imaginary crowd thought that was in.”

The only thing that reminded Bill that the imaginary crowd wasn’t real was the absence of cries from the imaginary Spurs supporters suggesting that VAR should go [bleep]itself after a decision so comical - the Harry Kane non-goal - that you could only giggle.

Up and running in Manchester, then, Martin Tyler suggesting to Gary Neville that, for him, this evening was the stuff of nightmares. “[Grunt],” Gary replied, so that was a yes.

Ten-ish minutes in to the first half and a fireworks display commenced outside the ground, Martin, Jamie C and Gary initially sounding a little startled until realising they might have been of the Scouse celebratory kind. “Your lot out again,” said Gary to Jamie C, who just about stifled a chuckle.

The only fireworks out on the pitch came from the lads in light blue, Liverpool’s defending much like it had been in the BVD (Before Van Dijk) days (God be with them), even if Van Dijk was actually on the field.

“Robertson has been outstanding all season,” said Gary of the Andy man, “but he looks like a player who’s been on the lash.”

The same could have been said of their entire rear-guard, drunk on success perhaps, Micah Richards echoing the allegation at half-time when he suggested “they’re still on the champagne”.

At this point you’d have expected Roy to unleash hell and call for Jurgen to step down, but he didn’t, so maybe he’s mellowing,

“I’m quite excited by what I’m seeing,” said Gary.

“It takes you back to your childhood,” asked Jamie C.

“Yeah. I can’t wait ‘til this lot are back where they should be - sixth.”

1 Real Madrid crash out to relentless Manchester City performance
2 Nicola Sturgeon ‘furious’ as players’ pub trip sees Aberdeen game postponed
3 The game they loved so well: How cricket united Hume, McGuinness and McCann
4 Out of Bounds: Challenge Tour can be stepping stone to greatness
5 Rory McIlroy steadies the ship after shaky start at US PGA
Real news has value SUBSCRIBE