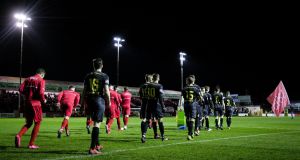 The League of Ireland is set to return on July 31st. Photograph: Brian Reilly-Troy/Inpho

Even as Niall Quinn was welcoming the vote for a return of the Airtricity League on Tuesday, which he said would allow everyone involved to focus on football, the clubs were still getting to grips with the fallout. Four initially felt aggrieved enough by the decision taken and the way it was reached to ponder legal action or a boycott; but the threat seemed to recede on Tuesday night when one, Sligo Rovers, issued a statement saying that they intend to return to play.

At a Premier Clubs Alliance meeting scheduled for Tuesday night, several clubs were still expected to make known their dissatisfaction with the part played by Shamrock Rovers in the vote by the National League Executive Committee (NLEC) to get everyone back playing on July 31st.

The seven-strong committee met to choose one of four options with the differences between the most likely two boiling down to whether the season would end with an automatic one up, one down promotion and relegation or; as had been envisaged at the start of the season, an additional play-off between the ninth placed side in the top flight and the team to emerge from a series of knock-out games between the sides placed second, third, fourth and fifth in the First Division.

Although the pair are more likely to have been influenced by a sense that sticking as closely as possible to the original format was the more legally robust position to adopt, a widely held belief among clubs was that the two nominees from other sectors of the association - Dave Moran and Paul O’Brien - would go with the majority so as, in effect, to let the league decide for itself.

In theory, that would have put the top flight outfits in the driving seat as nine of them had expressed a preference for the one up, one down format and they had three of the other five votes on the committee.

Shamrock Rovers, though, had always been clear that their preference was for the status quo and that was the way their man on the committee, Noel Byrne, voted. This, in effect, put the club in league with the First Division, which had two NLEC representatives, and so changed everything. Byrne and Rovers will doubtless feel that they did as they were entitled to but there was anger among the clubs most directly affected that they should have taken the 9-0 top flight view of the situation as a mandate and voted accordingly.

There was some talk of a move to unseat Byrne, who chairs the committee, but it is not at all clear if the required mechanism actually exists. There were was also initially speculation of action, legal or direct, involving Sligo Rovers, Finn Harps, Cork City and Waterford but the statement from the Showgrounds suggested that the moment might be passing.

Prior to that, Stephen McGuinness suggested that it is “time for a bit of unity,” and warned of the damage the league generally would suffer if the infighting were to continue and the return to action on July 31st was actually to come under renewed threat.

“I know that some clubs are not happy with the way this has turned out,” he said, “but we cannot have a situation where things drag on even more. I’d be pleading with the clubs at this stage just to press ahead with getting the league up and running again.”

The unfolding situation may be influenced by the assessment among their rivals of what sort of shape Waterford might be in when play is resumed. With no manager at present and a number of overseas players who are yet to return, there is clearly speculation that they might be weakened to the point where they find it hard to stay clear of the automatic relegation spot. It is scarcely the sort of unity McGuinness would have had in mind but it might just help bring the other three most obviously relegation threatened sides to some sort of consensus.

With the financial side of things and the scheduling of the cup (the concluding three rounds will be played immediately after the league ends in early November) agreed, it is hard to imagine any of the other six clubs wanting any further delay and fixtures are likely to be published over the coming days.

Quinn acknowledged that the solution was “not quite perfect in terms of what all of the clubs wanted,” and the former international, who has talked a great deal about the need to prioritise the league, has not emerged from all of this with his popularity enhanced. He is presumably rather more aware now than he had been at the start of what has been a long, drawn out and damaging process, just how difficult it would be to find a solution that everyone could have bought into enthusiastically.

For all their obvious efforts, the current leadership of the FAI seem to have seriously underestimated the challenge they were undertaking with the league and if they are sticking around then there will be important lessons to be learned from what has transpired.

The bigger issue is for the clubs, though, whose inability to find any real common purpose across the two divisions has surely put paid to the notion that the league, in its current form, at least, can ever hope to run itself. The gap between top and bottom has never felt wider. The football, when it finally returns, will be a very welcome distraction but it might take a while for the fractures to be healed.