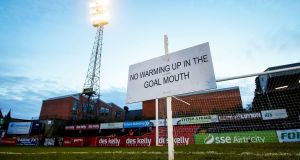 The League of Ireland is set to restart on July 31st. Photograph: Tommy Dickson/Inpho

The FAI’s board has backed the formula to get the Airtricity League restarted, that was approved by the National League Executive Committee on Tuesday.

A number of clubs are understood to be weighing up how to react in light of the decision and a legal challenge by at least one is said to remain a distinct possibility.

The NLEC had voted 5-2 to retain the usual promotion and relegation structures, and the two members of the committee nominated from other sectors of the association are understood to have gone with the majority, on the basis of legal advice that suggested this would be the course of action least likely to be successfully challenged by disgruntled clubs.

Among the things that disgruntled clubs have since objected to is the fact that they were never shown this legal advice.

In its absence, there is a widespread belief among the top flight outfits that the way the process has been handled has been unfair and flawed.

After a meeting of the Premier Clubs Alliance on Tuesday night, the organisation had written to Roy Barrett, chairman of the association’s board, to express their anger at both the decision and the way it was reached. A number of the clubs also sent separate correspondence on the issue.

It was argued that the formula, which provides for a play-off between the ninth placed side in the top flight and the winner of a series of games between the clubs that finished between second and fifth in the First Division, as well as the straight one up, one down which they favoured, was unreasonable given the truncated nature of the season.

The board appear to have concluded, however, that it was the least-worst solution, although the association’s position is not helped by the fact not all of the league’s clubs have signed this season’s Participation Agreement, the document that, among many other things, obliges teams to accept decisions taken in relation to the running of the league.

Games are scheduled to resume on July 31st.