Match against KF Drita called off hours before kick-off 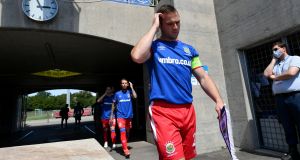 Linfield look set to become the first club to receive a Champions League bye because of disruption caused by the Covid-19 pandemic, after their Kosovan opponents were put into quarantine in Switzerland.

The Northern Irish champions had their match against KF Drita called off hours before kick-off on Tuesday evening. The match had been scheduled to take place behind closed doors in Nyon, the home of Uefa.

A first Drita player tested positive for coronavirus on Friday. A second player was found to have contracted the virus in a subsequent round of testing on Monday, with Swiss authorities acting to isolate the entire squad, meaning the game could no longer be played as scheduled.

The news comes a few days after Uefa revealed a new series of procedures to protect the Champions League and Europa League from disruption by the pandemic. According to the new guidelines, clubs who have restrictions imposed upon them within 48 hours of a match taking place could face forfeiture.

In confirming the test results Uefa said the matter had now been referred to the governing body’s control, ethics and disciplinary body, which is expected to remove Drita from the competition.

The relevant part of the new rules states any club “whose national/local authorities have imposed restrictions preventing the match from taking place as scheduled will be held responsible and the match will be ... forfeited by such club, which will be considered to have lost it 3-0”.

A statement from Linfield said: “The Linfield team was advised of the decision on boarding the coach to travel to the game and instead of travelling to play the game have instead travelled to the stadium for a training session.”

Uefa finds itself in the unusual situation of the 2020-21 Champions League season having started before the 2019-20 edition has finished. This week Atlético Madrid announced two of their players, Angel Correa and Sime Vrsjalko, had tested positive. The pair are self-isolating at home while the rest of the squad – who have all tested negative – are preparing for the quarter-final against RB Leipzig on Thursday. – Guardian