Foxes come from behind in London; Burnley ease past Fulham in FA Cup fourth round 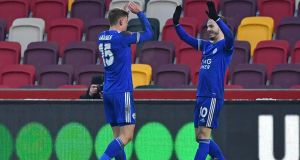 Second-half goals from Cengiz Under, Youri Tielemans and James Maddison saw Leicester come from behind to knock out cup specialists Brentford 3-1.

The Championship Bees, who shocked four Premier League sides on their way to this season’s Carabao Cup semi-finals, were threatening to add the Foxes to their list of scalps when they led through Mads Bech Sorensen’s early goal.

But whatever City boss Brendan Rodgers said at half-time did the trick because just six minutes into the second half they were in front, before going on to comfortably book a home meeting with Brighton in the fifth round.

Leicester, without injured top scorer Jamie Vardy, made eight changes but England midfielder Maddison kept his place and was instrumental in their comeback.

The visitors threatened in the opening moments when Under charged to the byline and pulled the ball back for Ayoze Perez, whose first-time volley flew just wide.

But it was Brentford who went ahead with their first attack after Leicester failed to clear Vitaly Janelt’s corner.

Defender Sorensen was quickest to react to the loose ball and poked it past Foxes keeper Danny Ward from close range.

The hosts could have added to their lead in the first half, notably from another Janelt corner which found its way to Tariqe Fosu at the far post, but Ward got down well to block his effort.

Saman Ghoddos then whistled one free-kick narrowly over before forcing Ward to tip a second over the crossbar before half-time.

Leicester had offered little in the opening 45 minutes, but that changed just 48 seconds after the restart.

Maddison weaved through the Brentford rearguard to the edge of the area before teeing up Under, who powerfully fired home past Luke Daniels.

Then, in the 51st minute, Tielemans was tripped in the area by Fosu and the Belgium midfielder sent Daniels the wrong way with the spot-kick.

Under should have added Leicester’s third when Ricardo Pereira pulled the ball back to him but the Turkey midfielder side-footed wide from 12 yards out.

Instead Maddison killed off the tie with 20 minutes remaining when he tapped in the rebound after Barnes’ shot was saved.

Jay Rodriguez struck twice for Burnley as they progressed through to the FA Cup fifth round thanks to a dominant 3-0 win at Fulham.

The 31-year-old had not found the net since a 1-1 draw at Liverpool on July 11th, but gave his side the lead with a well-worked header just after the half-hour mark.

Rodriguez then doubled the visitors’ advantage in the 71st minute, firing down the middle from the penalty spot.

With just under 10 minutes left on the clock, Rodriguez turned provider, controlling a loose ball in the Fulham penalty area with his shoulder into the path of Kevin Long who was able to tap home and secure his side’s place in the next round.

The snow had only been cleared from the pitch an hour before kick-off on Sunday, which left the surface wet and the grass slow.

Burnley started brightly and appeared full of confidence and momentum after their shock win at Anfield in midweek.

Matej Vydra had the ball in the back of the net inside four minutes for the away side before the flag went up for offside, with Fulham goalkeeper Marek Rodak then forced to make a save just moments later.

The first time the hosts got forward in numbers, Aleksandar Mitrovic headed the ball into the net following a clever run from Bobby Decordova-Reid who found Aboubakar Kamara, but he was in an offside position.

Vydra had another opportunity to give the visitors the lead just before the hour mark as the 28-year-old was played in through the middle by Dwight McNeil, one of just two players who also started in midweek, but Rodak was able to make the save.

Moments later, however, Burnley broke the deadlock through Rodriguez, who glanced home a well-weighted Jack Cork cross from the right side.

Fulham almost levelled the tie at the start of the second half, with left-back Joe Bryan forcing Bailey Peacock-Farrell into a save with a well-hit right-footed volley before the ball fell to Mitrovic who managed to get his own shot away.

Referee Andrew Madley immediately pointed to the spot in the 70th minute after a coming together between Michael Hector and Vydra, with the Fulham defender adjudged to have nudged the forward in the back.

Rodriguez made no mistake from the spot to double his side’s advantage.

Burnley then secured their progress in the competition through Long in the 81st minute.

A long ball forward was not dealt with by the Fulham defence and Rodak was unable to gather the ball, which fell to Long who slotted home for his first club goal since September 2018.