Scott Brown sent off as Celtic held by Ross County 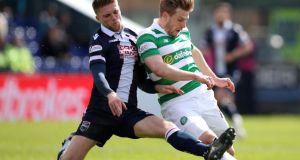 Celtic skipper Scott Brown faces a suspension for their Scottish Cup semi-final against Rangers after being sent off in added time in their 2-2 draw against Ross County.

Brown was shown a straight red card for a wild challenge on Liam Boyce, who had converted a controversial penalty moments earlier to consign Celtic to a third draw in six Premiership games.

The midfielder will also miss a league game against Rangers unless Celtic successfully appeal against Don Robertson’s decision, which seems highly unlikely.

Robertson had infuriated Celtic by awarding a penalty when Alex Schalk got in front of Erik Sviatchenko to meet Michael Gardyne’s pass and dived without any contact just inside the box.

Celtic were missing defenders Mikael Lustig and Dedryck Boyata and manager Brendan Rodgers lined up with a three-man central defence featuring Tierney with James Forrest and Callum McGregor in the wing-back roles.

Tierney gave a warning of his threat after an uneventful opening 15 minutes when his 30-yard strike bounced just in front of Scott Fox, who got down to hold.

County lined up with a similar formation to Celtic and they largely nullified the champions in the opening period. The only time Celtic looked dangerous was when they got their wing backs round the outside and that rarely happened.

When McGregor did make the byline, Dembele failed to connect properly with his cutback and Forrest’s shot was well blocked by Kenny van der Weg after Rogic kept the attack alive.

Celtic were struggling to create but Tierney then took matters into his own hands in the 34th minute. The hosts had a lot of men behind the ball when the teenager collected a Rogic pass but he drove the ball into the bottom corner past a motionless Fox.

The hosts looked lively in the opening stages of the second half and they were rewarded five minutes after the break when Gardyne met Ryan Dow’s inswinging cross and guided his header in off the crossbar.

The Staggies kept the pressure on from a series of corners and Gordon saved an Andrew Davies header and a Boyce volley.

Rodgers made a tactical switch in the 63rd minute. Right back Cristian Gamboa and striker Leigh Griffiths came on for Rogic and Dembele and Celtic immediately got on top with their more familiar 4-2-3-1 set-up.

Tierney and Gamboa were putting County under pressure from the flanks and Roberts made it count in the 78th minute when he got away from his marker and slid the ball inside the far post from a tight angle.

Stuart Armstrong hit the bar from a free-kick and Celtic looked set to canter to victory until the dramatic finale. Boyce sent Gordon the wrong way from the spot before being felled by Brown two minutes later in a tackle which sparked a melee and a costly red card.