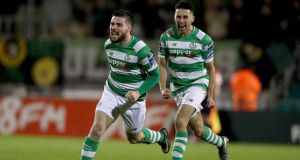 Brandon Miele capped his first start in a month with a match-winning goal as Shamrock Rovers honoured 30 years since the loss of Milltown with a morale-boosting victory as Sligo finished with 10 men at Tallaght Stadium.

The chief note of a fitful first half came on 23 minutes when Sligo midfielder John Russell saw a straight red card for a reckless challenge on Roberto Lopes.

Rovers had far more focus from the start of the second half and took the lead three minutes in.

Micheal Schlingermann pushed a low drive from Graham Burke out for a corner. Trevor Clarke took it short to Darren Meenan who fed Miele who drilled a low shot to the near corner for his second goal of the season.

The woodwork deprived Rovers a second goal on 70 minutes. Gary Shaw met Simon Madden’s perfect cross with a thumping header that bounced down and out off the underside of the crossbar.

BJ Banda was hailed a Finn Harps hero at Maginn Park, the teenager’s performance frustrating an out of sorts Derry defence, particularly in the second half.

Banda, who entered the fray as a first-half sub, netted his goal via a deflection in the 45th minute, the ball looping over the head of Ger Doherty before dipping into the net.

That strike, which came against the run of play, boosted the Ballybofey side who totally frustrated Derry following the change of ends before producing a killer striker with 10 minutes remaining with a second goal which had been fashioned by Banda.

He forced Doherty into a low save and while the goalkeeper did well to parry the effort, another sub, Michael Funston was following up to toe-poke the ball home from close range.

Played in front of 1,600 supporters, Derry clearly struggled in defence, the death of their inspirational captain, Ryan McBride, remains significant for the “Candy Stripes,” while both Barry McNamee and Rory Patterson missed the game due to injury.

Derry had enjoyed more of the ball during the opening period but they failed dismally in the final third, missed chances proving particularly costly.

Ronan Murray snatched a draw at the death for Galway United but the wait for their first win of the season goes on as St Patrick’s Athletic became the latest side to take points from Eamonn Deacy Park.

It has been a treacherous opening to the campaign for Shane Keegan’s side, who are winless, and with just four draws so far they already look doomed.

Despite sharing the points away from home, St Patrick’s are still well off the pace and they failed to bounce back from last weekend’s 2-0 defeat at Limerick.

Rory Feely powered a header to the roof of the Galway net four minutes before half-time but St Patrick’s Athletic had plenty of opportunities in the first half.

They only led 1-0 at the break but Gavin Peers had also gone close while Kurtis Byrne had an early goal disallowed. But Murray scored an 89th-minute penalty after Gavin Holohan was bundled over by Patrick Cregg.