Harry Kane on the mark as Spurs keep pressure on Chelsea 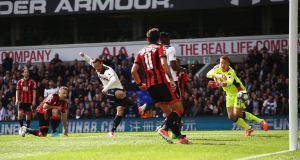 Harry Kane is back and Tottenham are refusing to give up the Premier League title chase as the striker announced his return from injury with a goal in a 4-0 thrashing of Bournemouth.

Kane, who was making his first start in almost five weeks after recovering from an ankle injury, scored one and set up another as further strikes Mousa Dembele, Son Heung-min and Vincent Janssen helped seal a comfortable victory.

Spurs have now cut the gap behind league leaders Chelsea to four points, with the Blues to play their game in hand away to Manchester United on Sunday.

It would appear a potentially pivotal weekend in the race at the top given Tottenham’s fixtures become much tougher from here on in while Chelsea’s turn kinder.

Mauricio Pochettino’s men are still to face Arsenal, United and Leicester. For Chelsea, only a trip to Everton looks awkward.

Bournemouth, meanwhile, remain on 35 points but upcoming games against Middlesbrough, Sunderland and Stoke should see the Cherries to safety.

There was, however, the worrying sight of Jack Wilshere limping off with what looked like an ankle injury in the second half.

If Spurs are to pull off a remarkable comeback they will need Kane back in form and while the 23-year-old, nominated for the PFA’s Player of the Year award on Thursday, was still regaining sharpness in his 79 minutes here, there was enough to suggest he is not far away.

He has now scored 20 goals in three consecutive Premier League seasons, becoming only the fourth English striker to do so after Alan Shearer, Les Ferdinand and Andy Cole.

Son had hit four in three during Kane’s absence and the South Korean kept his place, with Pochettino accommodating him in a 4-2-3-1 while opting to leave Victor Wanyama on the bench.

Eric Dier was preferred in midfield and both he and Son justified their selections, giving Pochettino a selection dilemma ahead of next Saturday’s FA Cup semi-final against Chelsea.

For now, though, this was a continuation of their relentless form at White Hart Lane, which has now seen Tottenham win 12 consecutive games at home – their best ever record in the top flight. It was also their seventh league victory in a row overall, their finest run since May 1967.

The breakthrough was not long coming although when it came it was largely self-inflicted.

In the 16th minute, Simon Francis opted to let the ball run behind for what he thought would be a Bournemouth goal-kick but referee Michael Oliver instead awarded a corner.

When the resulting cross spilled out to Dembele seven yards out, he made no mistake in firing it into the net for his first goal in just one day shy of 15 months.

Three minutes later their advantage was doubled and again it was a Bournemouth error that started it.

Wilshere, much to the delight of the home support, was the player at fault, giving the ball away under pressure from Dier and in a flash Kane was flicking it behind him and Son was driving it through Artur Boruc’s legs.

Bournemouth were chasing shadows, a sumptuous Junior Stanislas cross that just evaded Benik Afobe the closest the visitors came to posing any kind of threat.

If Eddie Howe had hoped the interval might spark a change in fortunes he would soon be disappointed as two minutes and three seconds after the restart, his side conceded a third.

Kane looked to have lost control under pressure from Francis but he wrestled the ball back, twisted away from the defender and rifled it past Boruc for his sixth goal in three games against this opposition.

He squandered two excellent chances to add to his tally soon after, the second thwarted by a block from Wilshere, who then dropped to the floor clutching his ankle.

The midfielder was then subjected to a harrowing few minutes of taunts from jubilant Tottenham fans before he finally hobbled down the tunnel.

Son could have made the scoreline more emphatic by volleying more precisely and then later leaving the ball for Dele Alli, when he was offside.

But Janssen, on as a substitute, added a final flourish converting at the second attempt from close range after Ben Davies had pulled back in stoppage time.