As fans turn on David Moyes, his decline accelerates 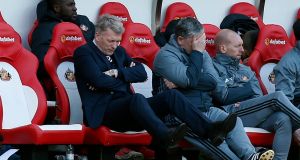 This time four years ago David Moyes was about to succeed Sir Alex Ferguson at Manchester United but today he is struggling to restore his tattered reputation at Sunderland where a significant proportion of supporters want him sacked.

It has been quite a fall from grace for the former Everton, United and Real Sociedad manager who endured chants of “We want Moyes out” from all corners of an unusually hostile Stadium of Light during Sunderland’s 2-2 draw with West Ham United on Saturday. There were also choruses of “David Moyes had a dream, to fuck our football team” and boos when the home manager ventured from his dugout.

Despite Sunderland’s position – bottom of the Premier league and nine points adrift of 17th-placed Hull City – Ellis Short, the club’s owner, is not minded to sack the Scot, but may be forced to rethink should further anger build during the remaining two home games against Bournemouth and Swansea City.

Moyes, meanwhile, has made it clear he has no intention of resigning and is determined to rebuild Sunderland in the second tier while challenging for immediate promotion.

He maintains that he inherited a poisoned chalice at a club currently around £140m in debt which, in recent years, has consistently occupied the Premier League’s bottom five positions despite shouldering a top-10 wage bill.

As Sunderland’s seventh manager in five years Moyes feels he is paying for predecessors’ recruitment mistakes, has been unlucky with injuries and wants time to conduct root and branch reform.

His critics’ riposte is that his tactics have been unimaginatively one-dimensional and his prolonged marginalisation of Wahbi Khazri, arguably Sunderland’s most gifted individual, self-destructive.

Above all, they have been dismayed by the persistently downbeat demeanour of a manager who, as early as last August, declared that a relegation battle beckoned and underwhelmed by a series of low key, low impact, signings including Darron Gibson and Donald Love, almost all of whom had previously played for Moyes at either Everton or Manchester United.

Reconstructing the squad will involve a major overhaul this summer as, by way of exacerbating the manager’s problems, his Italian forward Fabio Borini has revealed the dressing room has been fractured by internal divisions.

Without a home league win since mid-December, Sunderland have long seem destined for the Championship but, paradoxically, Saturday represented the team’s best performance for some time.

Unfortunately for Moyes the crowd were able to use the fact that his side’s first goals in eight games were scored by Wahbi Khazri and Borini, two players he has persistently sidelined, as a stick to beat him with. “Are you watching David Moyes,” they sang as Khazri, a Tunisia playmaker starting his first game since October, performed his party piece, namely scoring direct from a corner to equalise André Ayew’s early opener.

James Collins restored West Ham’s lead before Borini, only brought off the bench as Billy Jones had been stretchered off with concussion, snatched a 90th-minute equaliser before celebrating, somewhat provocatively, with a knee slide in front of the home bench.

Afterwards Borini revealed that there had been behind-the-scenes tensions within the squad this term. “We have not been as united as a group as in previous seasons, that’s what probably has been the problem,” said the Italian. “There have been a little bit of problems within the dressing room but that’s for us to deal with. To keep going now we have to be more united than ever before.”

Remarkably, attendances at the Stadium of Light have averaged well over 40,000 per game this season and Saturday was the first time a hitherto extraordinarily loyal crowd have turned on the manager.

“The chants were to be expected said Moyes,” who will shortly discover whether he faces sanction from the Football Association in the wake of the unfortunate comments he directed towards the BBC’s Vicki Sparks last month. “The manager and the team are not doing well and they are entitled to take their frustration out on somebody. It’s nearly always the manager and I have no issue with that. I have to accept it. I just remember I’ve got the third or fourth best win record of any Premier League manager.”

With Khazri most people’s man of the match, Moyes was asked why he had excluded a key player during Sunderland’s avoidance of relegation under Sam Allardyce last spring for so long. “I can only tell you my choice has been to play other people because of what I have seen,” said the 53-year-old who, earlier this season, turned down a chance to sign the currently unattached former Tottenham Hotspur and Manchester United striker Dimitar Berbatov. “But Wahbi was good today, much more disciplined.”

Tellingly, when Khazri scored Moyes sat with his arms folded while the rest of Sunderland’s bench applauded.