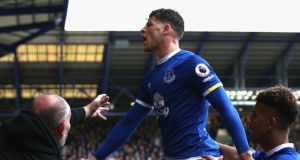 Ross Barkley of Everton celebrates after Ben Mee of Burnley scored a own goal during the Premier League match at Goodison Park. Photograph: Jan Kruger/Getty Images

Ross Barkley inevitably was the centre of attention as he inspired Everton to an eighth successive Premier League home win with a 3-1 victory over Burnley.

The midfielder found himself at the centre of a media storm this week, from being allegedly punched on a night out to becoming inadvertently embroiled in the row which saw the Sun newspaper banned from the club after derogatory comments about him from columnist Kelvin McKenzie.

He produced the perfect response by letting his football do the talking, scoring the important second goal – via two deflections off defenders – to make this current home winning streak the club’s best since April 1990.

Striker Romelu Lukaku tried to grab some of the glory with his ninth Goodison game with a goal, matching the record of the great Dixie Dean in 1934, late on but there was no doubt where the appreciation of the home fans was directed.

The future of both players remains in doubt, with Lukaku refusing to sign a new contract and Barkley not committing himself to another, but on his evidence – for different reasons – Everton have to do their best to retain them.

Phil Jagielka’s close-range effort had given his side the lead just after half-time only for goalkeeper Joel Robles’s rush of blood in needlessly conceding a penalty allowed Clarets striker Sam Vokes to equalise.

But Barkley was the main man, heading off the line in either half, as he proved effective at either end of the pitch.

Even a booking for climbing into the Gwladys Street end to celebrate his goal could not put a dampener on a day which ended with a standing ovation with his substitution a minute from time.

Fabio Borini came off the bench to grab a Premier League lifeline as Sunderland rescued a point in dramatic fashion.

The Italian snatched a 2-2 draw with 10-man West Ham moments after being introduced as an 88th-minute replacement for the injured Billy Jones, who was carried from the pitch on a stretcher while being given oxygen.

It may prove to be too little, too late for the Black Cats and manager David Moyes but opposite number Slaven Bilic was left fuming after seeing his side twice pegged back after taking the lead through Andre Ayew and James Collins in front of a crowd of 40,168 at the Stadium of Light. Wahbi Khazri, starting for the first time since October 29th, scored direct from a corner for Sunderland in between.

Crystal Palace recovered from two goals down to secure a 2-2 draw with Leicester and take their latest step towards preserving their Premier League status.

Early in the second half at Selhurst Park goals from Robert Huth and Jamie Vardy had taken the visitors close to a momentum-building victory just four days ahead of their Champions League quarter-final second leg with Atletico Madrid.

Palace then swiftly responded through Yohan Cabaye and Christian Benteke then secured the draw that took them up to 15th, seven points clear of the bottom three and within five of ninth.

An error from Swansea’s Alfie Mawson led to Watford’s winning goal at Vicarage Road with defeat leaving the visitors inside the bottom three.

Etienne Capoue capitalised on Mawson’s sloppiness to score the only goal of a dull encounter, the 1-0 win taking Watford onto 40 points and all-but securing their top-flight status.

But it was a fifth loss in six games for the Swans, who are swimming against the tide in their bid to avoid the drop.

Paul Clement’s side remained 18th in the table and two points behind Hull, who lost at Stoke, with just five games left to turn their season around.

A goalless draw at home to fellow bottom three side Middlesbrough represents the only point for the south Wales outfit since a win over Burnley at the start of March.

Xherdan Shaqiri’s stunning 30-yard strike capped a Stoke victory that eased their relegation fears and left Hull still looking nervously over their shoulder after another fruitless away day.

The Swiss fired into the top corner with 10 minutes remaining in a 3-1 win for the Potters, who ended their four-game losing streak to move 11 points clear of a relegation zone which Hull remain just two above.

Still without an away success in the league since August, Marco Silva’s side had been level when Harry Maguire cancelled out Marko Arnautovic’s opener, yet substitute Peter Crouch restored Stoke’s lead before Shaqiri’s moment of magic.