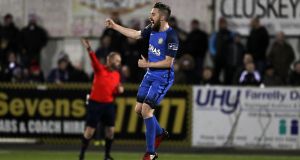 There was plenty of controversy at Oriel Park as Bray Wanderers shocked champions Dundalk by running out 3-1 winners.

In a week when Stephen Kenny highlighted Dundalk’s failure to win a penalty in the past 12 months, the Lilywhites boss watched on as Bray Wanderers were awarded two highly controversial ones by referee Jim McKell.

Dundalk bossed the first half but couldn’t make the breakthrough and the cat was thrown among the pigeons in the 54th minute.

McKell ruled that substitute Stephen O’Donnell pushed Aaron Greene to the deck and Gary McCabe stepped up to squeeze his spot-kick inside Gary Rogers’s left-hand post.

Parity was restored in the 56th minute when O’Donnell raced into the Bray penalty area to dink David McMillan’s slide-rule pass over the advancing Peter Cherrie.

But the Oriel Park faithful were left seething again when McKell pointed to the spot again in the 68th minute when Ryan Brennan went down from a free-kick. With boos ringing around the ground, McCabe stepped up to beat Rogers again.

And Harry Kenny’s side made sure of the win when Ryan Brennan was on hand to slam past Rogers to secure Bray Wanderers a huge win and leave Dundalk’s hopes of four-in-a-row in crisis.