Ken Early: This Liverpool team is the best and most likeable ever 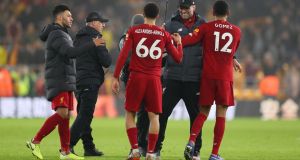 Just as well that the least-attended Merseyside derby in history was also one of the dullest. The Premier League champions-in-waiting looked like they usually do after time off – wooden and stilted. Getting his team warmed back up without taking any injuries seemed to be Jürgen Klopp’s main priority for the match. With five substitutes made by 73 minutes, it felt like he was treating it like a pre-season game. His team always needs a few games to find their rhythm before they can be at their best.

Do they also need their supporters present to be at their best? More than any other top team in Europe, Liverpool have integrated the energy of the crowd into their style of play. Their aggressive attacking style, the mode they click into when they are trying to force the issue, is at its best when the physical pressure they put on opponents is intensified by the psychological pressure from the stands.

Liverpool can still win the title this week if they beat Crystal Palace on Wednesday and Manchester City drop points in their matches against Burnley and Chelsea. Otherwise it will go to the Etihad on July 2nd, where Manchester City could delay things further – while also injecting a note of uncertainty into the victory lap of a team that only a couple of weeks before the shutdown seemed about to rewrite all the record books.

They have already had to come to terms with the fact that their first title in 30 years will be won and celebrated behind closed doors. This is still better than the season being struck off the records and Liverpool not winning the title at all, as still seemed possible just a few weeks ago.

Klopp, with his gift for reframing negatives as positives, insisted he would welcome the asterisk: “It is historic now more than ever. Give us an asterisk. Yes, do it. Because it is the most difficult season ever.” But football being the way it is, the manner in which his side gets over the line will feed into the debate over where they stand in the pantheon of Liverpool teams.

There is that argument that the test of a great team is whether it develops into a “dynasty”. What is a dynasty anyway? To me the word triggers the memory of Alexis Colby and Krystle Carrington; it was only later that I learned “dynasty” also meant a ruling family of some kind. If you want to be a football dynasty the key point is that you must have more than one generation of success. So if this team is generation one, then Liverpool would have to create another title-winning team immediately after this one to qualify for dynastic status.

The “dynasty” rule is in effect saying that in order to be considered a great team, you must first have been two great teams – which doesn’t make any sense. The former Liverpool captain and manager Graeme Souness suggested in the Sunday Times that the current team cannot be compared to his unless it goes on to dominate the era as his own team did between 1978 and 1984. It seems very unlikely that they can, but that says more about the era than the team. This current side is the best Liverpool team that has ever kicked a ball.

Premier League champions-to-be and runners-up the season before, Champions League winners last year and runners-up the season before, Liverpool are already the dominant side of the era. You can make the case for them being the best-ever on numbers alone. Before the season was interrupted, they were collecting points at the rate of 2.83 points per game – a rate that has never been matched by any side in the five top European leagues over a full season: not in the best seasons at Bayern or Juventus, Real Madrid or Barcelona, PSG or Manchester City.

Last night’s draw brought that down to 2.73 points per game, but it still looks likely that they will set a new club record for league points, beating the old record of 97 set last season. None of Liverpool’s 18 title-winning sides came close to the 2.55 points per game pace of last year’s second-place finishers. The side that got nearest was the team of 1978-79, previously generally regarded as the best league campaign in Liverpool’s history. That team took the equivalent of 98 points in their two-points-for-a-win, 42 game season: 2.33 points per game. That was good enough to finish miles ahead of Nottingham Forest 41 years ago, but it wouldn’t have been enough to beat 2019 Manchester City.

But more than the numbers and more even than the trophies, this team’s legacy will be measured in the imprint they have left on the imaginations of football fans. A personal view is that Klopp has transformed the global image of Liverpool much as Arsene Wenger transformed Arsenal in the late 1990s. Players like Salah, Mané, Firmino and Alexander-Arnold are doing for Liverpool what Henry, Vieira, Pires and Bergkamp did for Arsenal 20 years ago.

The 1970s and early 80s champion Liverpool teams were all about winning, to the point where they evinced the greatest disdain for supposedly skilful or ‘entertaining’ sides who did not share the same focus on what really counted. If they had to pass the ball back to the goalkeeper 30 times to kill the game, they would take malicious pleasure in doing so. And if they could not win, then they would gladly take the draw, since draws were still a useful result in the days when even the top teams could be counted on to lose five or six times a season.

The current team is prevented by rule changes from embracing the negative side of the game to the same extent, and knows that draws are no good when you are competing with Guardiola’s City. So they go out and try to win every game in style. The result is something much rarer in the history of Liverpool than league or European titles: a team you don’t have to be a Liverpool fan to like.