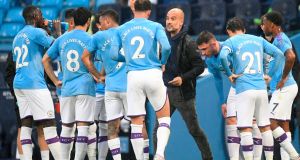 Pep Guardiola hopes Manchester City’s all-but-certain surrendering of the Premier League title to Liverpool will give his team an extra edge next season.

A year ago Guardiola’s team became the first to win consecutive titles for a decade. He has previously spoken of the potential for players to ease off subconsciously when champions and believes his squad will respond to the challenge of being dethroned.

“Hopefully we can learn from our beginning to the season,” the manager said.

“After winning the Community Shield against Liverpool we dropped points that maybe we didn’t expect. But I don’t know if it’s going to happen. I think every season the opponents get stronger.

“Liverpool will remain the strong team they are; we are seeing how Chelsea are investing in this transfer market; we saw in the last period how Man United made a step forward; Tottenham are going to recover a lot of injured players, with Son [Heung-Min], Harry Kane and other players and with an experienced manager like [Jose]Mourinho they are always going to be strong. Arsenal with more time with Mikel [Arteta, the manager] and Leicester, you know [are strong].”

After beating Arsenal 3-0 on Wednesday, City host Burnley on Monday. “It’s about getting as quick as possible the points to secure qualification for the Champions League and in two or three weeks we’ll know about the sentence from Uefa,” Guardiola said of the club’s appeal to the court of arbitration for sport against Uefa’s two-year ban from European competition.

Leroy Sané will leave in the summer if City receive an acceptable offer but Guardiola suggested he may not seek a replacement. “We have enough good players up front,” he said. “Gabriel [Jesus]can play on the left, Phil Foden can play on the left, we have Raheem [Sterling]there.

“We have other priorities maybe. And I don’t know, after coronavirus, if the situation economically and financially for the clubs is changing. I don’t know what the situation is. We’re going to see at the end of this season.”

Guardiola indicated Benjamin Mendy may have a long-term future despite recurring injury problems. “It is our wish and especially his wish – he has a special quality, with his energy and his potential,” he said. “As a left-back he is an extraordinary player.” - Guardian