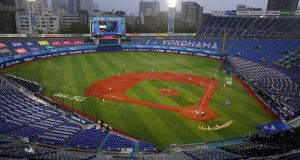 Basball returned in Japan last week - from July 10th fans will be able to attend venues such as Yokohama Stadium. Photograph: Kimimasa Mayama/EPA

Supporters will be allowed into stadiums to watch Japan’s top baseball and soccer leagues from July 10th, the federations for the country’s two most popular sports leagues said on Monday.

As in most of the rest of the world, Japan’s major sports have been put on hold because of the coronavirus pandemic, with Nippon Professional Baseball (NPB) only beginning last week and J.League soccer to restart on July 4th.

The baseball season started without fans in stadiums, in line with Japanese government restrictions, to help reduce the spread of coronavirus.

However, NPB Commissioner Atsushi Saito and J.League Chairman Mitsuru Murai said spectators will start to be admitted into sports grounds from July 10th.

“We have to take the situation into consideration, but I got word from the government that it is okay to announce we can start admitting spectators from July 10th,” Saito said, according to Kyodo News, following a meeting of the governing bodies to discuss coronavirus countermeasures.

There was no mention of how many fans would be allowed to attend.

The government’s current guidelines allow for a gradual increase in the number of spectators at sports events after July 10th, but the readmittance of fans had not been previously confirmed.

1 Gerry Thornley: Antoine Dupont and France look perfectly primed for Ireland visit
2 Seán O’Brien: Anger over my parents’ break-up never left me
3 Ireland's centre will hold thanks to Henshaw and Aki’s midfield muscle memory
4 France’s Teddy Thomas ruled out of Ireland clash
5 Johnny Sexton: ‘We just know we have to be a lot better in all areas on Saturday’
Real news has value SUBSCRIBE
Crossword Get access to over 6,000 interactive crosswords