Is Liverpool’s glorious season going to end in anticlimax? 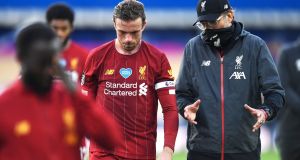 When in 20 or 30 years Liverpool fans settle down to revel in the great side that ended the 30-year drought, it’s probably not this game they’ll be watching. The 19th league title, the first since 1990, will come and there may yet be further wonders to garnish the final weeks of the season, but the derby was not a game to dispel fears that what should be one of the most glorious seasons in the team’s history will end in anticlimax.

The ceiling that’s almost painted when the gloss runs out. The anecdote that’s almost told when the waiter arrives to take the order. The run that’s half-complete when you bump into a colleague. The poem dreamt up in an opium-induced sleep that’s part-transcribed when the visitor from Porlock turns up. Everybody has had a project they’ve almost finished and then been interrupted. Some are able to return to it with renewed vigour, others muddle to a conclusion, some let it slide altogether. Liverpool seem to have taken up the brush with a sense of dutiful weariness.

The question is not whether they will win the title as whether they can finish it off in a style befitting the first three-quarters of the season.

Their run-in would probably have felt a little odd anyway. The likelihood 100 days ago was that they would win the league with six or seven games remaining, setting a record for the earliest a championship has ever been settled. That remains so, even if it is now also the latest, depending whether you judge such things by the fixture list or the calendar. Out of the FA Cup and out of the Champions League, with nothing to play for other than records, that’s a very long coronation procession, even after waiting for three decades. Perhaps fans could have sustained a two-month long party; without them, the danger is that this comes to feel a very long six weeks for Liverpool, protracted bathos at the end of what should be remembered as one of their great seasons.

The campaign peaked on Stephen’s Day with the 4-0 away win at Leicester, a performance that deserves to stand alongside the defining displays of the very best champions. Although Liverpool won the eight league games that followed, they haven’t been quite the same since – a sentence that simultaneously suggests the standards they set and the grim inequalities within the Premier League. There then came four defeats in six games, a run that was in part the result of Jürgen Klopp trying to protect his squad for Europe, in part a poor performance in Madrid in the first leg of the Champions League quarter-final and then a freakish second leg, and in part a continuation of that slight slackening that had been apparent since the turn of the year.

This performance was of a piece with those final weeks before the crisis: no lack of effort, but the slick interplay not quite firing. If there is a concern, it is only that the margin of error for setting a new points record is diminishing. The maximum possible now is 107.

If there is a dwindling to a conclusion, The temptation will be to blame it on the shutdown, but there had been a downturn before it. Perhaps it was fatigue brought about by a hugely demanding style of play and a programme that, in December particularly, became absurdly hectic. Or perhaps the problem was not playing – the real wobble came after Klopp insisted on honouring the winter break by fielding a youth team in the FA Cup replay against Shrewsbury. Perhaps, like some high-powered sports car, or a border collie, Klopp’s Liverpool need their daily run out.

Jordan Henderson, certainly, is in no danger of diminuendo. One of the fascinations of the absence of fans has been the capacity to hear players. Here, that was largely impossible, 21 players drowned out by a constant Wearside barking, constantly driving, cajoling, organising the press.

Energy and commitment didn’t seem the issue, but there was a raggedness to Liverpool early on, for all that they dominated both possession and territory.

The familiar flow wasn’t there, but then it hadn’t been for some time, and the absence of Andy Robertson and Mohamed Salah would have been disruptive anyway. The width Robertson offers, opening up the pitch on the left, was particularly missed and Liverpool will be glad of his probable return on Wednesday. Credit is due also to Everton’s midfield four, who restricted the space in central areas by staying extremely narrow. And plenty of derbies played in front of packed houses have been frenetically drab. The natural temptation is to see the shutdown as an explanation for everything but other factors still come into play.

And the shutdown perhaps brought undue attention to this game, raised expectations needlessly. Six of the previous seven derbies at Goodison, after all, had finished level. A tight game, a scratchy performance, in this fixture especially, is nothing unusual. The wider point remains that this has been an exceptional season for Liverpool, and this was a point nearer the title. After 30 years, another few days really doesn’t matter. - Guardian