O’Neill ‘delighted with the endeavour’ despite another Ireland defeat

Keith Duggan at the Aviva stadium 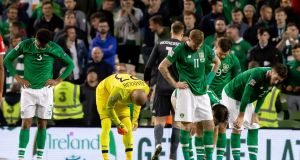 Ireland players dejected at the final whistle of the Uefa Nations League at the Aviva stadium. Photograph: Morgan Treacy/Inpho 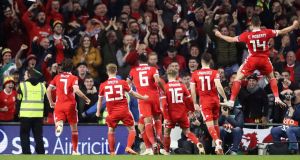 When Harry Wilson stood over the ball and began to survey the Irish wall and Darren Randolph’s goal, the crowd in the Aviva stadium could all but tell what was coming – 58 minutes gone and so far, so just-about-bearable. But: the glowering intent of the young Welsh man.

Early in the second half, Wilson’s direct, adventurous run had been abruptly halted by a scything tackle by James McClean, earning a yellow card for the Derry man. Just last month, Wilson had given Jose Mourinho palpitations in scoring a sensational free in Old Trafford to bring Derby County level with Manchester United in the Carabou Cup.

Now, Wilson would leave his mark at international level. He seemed symbolic of diverging paths of Ireland and Wales in that moment. Even without Bale, the superstar, even without Aaron Ramsey, they had this 21-yea- old, a five-year contract with Liverpool secured and already the toast, in his loan spell, of Derby. His left-foot shot was whipped around the Irish wall, leaving Randolph dead on his feet. 1-0.

Even if the performance had been marginally better from Ireland, the result was bleak. The home crowd, valiant in their attitude, must have felt as if they were watching the international team slide into irrelevance. In the 94th-minute, Ireland were still scrapping bravely and hopelessly for an equaliser, with Randolph tearing out of his goal for a last-gasp corner. There would have been a beautiful irony had Ireland’s goalkeeper been the one to break the goal drought. But no.

“I thought we put a big effort in, Certainly weren’t short of endeavour and started the game very brightly. Should have been a goal in front. I thought we had a strong last 25 minutes too when we were a goal behind. But a lot of positives. Delighted with the endeavour.

“Tonight I didn’t think we stood back. We allowed Denmark too much possession. But I thought we got on the front foot. And the one major thing, it’s a problem obviously, is trying to score a goal. So we will have to carve out more chances to try and score that elusive goal. We conceded a free kick and a really strong effort in fighting back.”

That elusive goal. At half-time, the Aviva announcer cheerfully confirmed that the night was goalless in what must have been one of the more redundant announcements in the history of the art. Everyone in the stadium, from Ryan Giggs and O’Neill, to the six-year-olds attending their first international, was terribly aware of the lack of goals at that moment.

The crowd was valiant in its attempts to raise some semblance of real atmosphere but the loudest chant of the evening came from the Welsh chorus behind Wayne Hennessey’s goal: You’re just a shit Northern Ireland. Given the delicate mood in Brussels, it was a low blow. And it was a diversion.

The teams tried hard without making much happen. Ryan Giggs’s young team – 19-year-old Tyler Roberts up front and 18-year-old Matthew Smith in midfield – settled into a crisp if unthreatening passing game while Ireland tentatively set about trying to manufacture the country’s next international goal.

Cyrus Christie found himself in a glorious position on nine minutes after Smith, covering back, slipped under pressure from Aiden O’Brien and gifted possession to the Fulham defender on the edge of the Wales penalty area. His right-foot shot was accurate and drew a decent save from Hennessey. But Christie had more time than he realised. A bundle of bright, expressive passes from Callum Robinson also helped to put further light between Ireland and the torpor of the Danish experience on Saturday evening. Shane Duffy’s 37th-minute header lacked the power but technically, it counted as a chance, a shot.

And that was about it. In the second half, the Welsh began to look, well, at home.

“Yeah. At times we just looked a little bit nervous on the ball,” said Giggs of the opening half.

“And you have to give credit to Ireland too . . . I thought they were really good, closing the gaps, compact, making it difficult. And we changed a few things. You don’t want to be greedy but we could have had more goals.”

They could: Tom Lawrence blew a three-on-two break and George Thomas stabbed a supreme opportunity too close to Randolph. Still, Giggs did well to disguise his delight here. It has been a sweet opening month for him. For Martin O’Neill, a night to dig in and wait until there is a break in the weather.

“I genuinely do,” he said when asked if he believed Ireland could qualify for the next European championships.

“We need some of the major players to come back in the side, Hopefully that will happen for the qualification group from the start but for the younger lads here, these are big matches for them.

“I am not so sure that I have never not asked questions of myself. You are asking about responsibility: I take responsibility for every kick made on that field by us. That will not change. In terms of questioning myself as a professional, both as a player and a manager, I have always done that.”