Wales prepared to earn the right to play 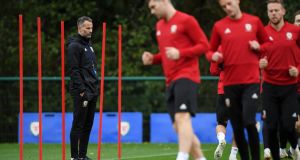 Ryan Giggs looks on as his team train during in Cardiff on Monday. Photoraph: Stu Forster/Getty Images

It might take a little while longer for it to become completely clear just how this Nations League is really regarded. Ryan Giggs’ admission, however, that he might have insisted on keeping Gareth Bale about the place had Tuesday’s game against Ireland been “a cup final,” helps to shine a little more light on the situation.

Wales will go top of this three team pool if they beat Ireland again but slip to third if they lose. It is part of the beauty, says Giggs, of a competition that puts fairly evenly matched sides up against each other with a severely limited margin for error. Martin O’Neill might not be quite so taken with the concept after seeing his side take one point from their two group games.

Victory on Tuesday evening would Ireland firmly back in the hunt for top spot and the place in the play-offs that goes with it. Defeat would mean Denmark having to lose their two remaining games for O’Neill’s men to avoid relegation and a third seeding for the Euro qualifiers proper.

Getting three points will take a bit of doing if the defeat in Cardiff is anything to go by, although clearly the absence of Bale and Aaron Ramsey and another couple of starters from the game is September might just help the home side’s cause. It is, as it happens, the first competitive game that Bale and Ramsey have both missed since the latter made his international debut in 2008.

Giggs, though, insists the talent is there to get by without them if younger players step up to the mark. First and foremost, though, they must address the shortcomings that were so obvious, he says, against Spain.

“We played really well against Ireland at home and I’ve said to the players that that was the benchmark, the standard they have to meet. But in that game we did the basics and then went on and did other things really well. Against Spain we didn’t even do the basics and if you don’t do them then you don’t have the platform to go on and show what else you are capable of.”

Tottenham defender Ben Davies reckons the Spaniards showed the Welsh “how play to play football,” in the 4-1 defeat. “They played a back three and they just made it incredibly difficult for us.

“They didn’t even do too much running,” he observed ruefully, “it was all just two-touch passing. Ireland played a back three against Denmark and if they do the same thing tomorrow night then we’ve have to try to learn from what Spain did to us.”

Giggs, it seems, is not setting the bar quite that high but, he admits, some improvement is certainly needed.

“We want to play football in the right way,” says the former Manchester United star. “But you have to earn the right to play that way really. First, you have to do the basics, win your battles, win them individually then as a team and then you might be able to take on players, play the sort of football that excites me, excites the fans who have travelled over. Teams don’t just allow you to do that.”