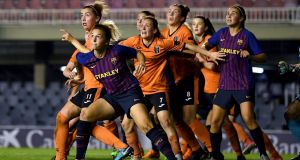 “The Champions League is there for us to enjoy,” the Barcelona full-back Marta Torrejón insisted and they certainly enjoyed this. For Glasgow City, by contrast, this was a difficult night, reality hitting hard. Aspiration is one thing; attainment another: a club built in part upon a Barcelona model, studied at close quarters here by the former manager Eddie Wolecki Black, was defeated 5-0 at the Mini Estadi, undone piece by piece.

“We can hurt them,” Scott Booth had said. Instead, it was Glasgow who hurt, the tie surely over already – yet recriminations may be relatively few so significant, so unavoidable, was the difference between these sides.

The game’s first shot actually came for Glasgow, Abbi Grant slicing past the near post after two minutes, but by half-time there had been just two more – and one of those, blocked, did not even make it into the area. Two more in a single second-half minute, with the score already at 4-0, were the sum of their attempts and neither drew a save from Sandra Panos. Barcelona, by contrast had 27 of them. That reflected the fact that victory was always likely, if not necessarily quite like this.

Defeat in Kazakhstan in the previous round had come as a warning, but Barcelona knew they were favourites – and Glasgow knew that, too. These teams have markedly different histories in this competition and while Glasgow had been defeated by Hibernian in the cup and face a battle against the same team this weekend to retain a domestic title that has been theirs alone for a decade, the culmination of a long season, the Catalans have only just begun and scored 21 times in the last four games, nine in their last game alone. Panos was a spectator as they added five more here.

At the other end, Lee Alexander twice had to be alert in the first half. She would later be to blame for a goal in the second half but that was the fourth, the game already long gone. When the opener had come, she could do little more than watched it float over her head and for much of the remaining 80 minutes, she saw Barcelona from worryingly close-range, her defence virtually treading on her toes, retreating further with every minute, forced ever deeper.

The scoring began when Mariona Caldentey escaped down the right. Her cross bent beyond the leap of Andressa Alves, but found its way through to Kheira Hamraoui, arriving from midfield. She cut back, shifted her weight and chipped the ball up and over Alexander, a touch of curve and dip bringing it down well below the bar.

A Champions League winner with Olympique Lyon this was her first goal for a Barcelona side who seek to emulate that. Only 11 minutes had gone but it was already their third attempt and it quickly felt like this game had escaped Glasgow.

Barcelona took control, the ball theirs, the territory and opportunities too. Patri Gujiarro hit the bar not long after and in the next move, a pattern became evident that was soon unavoidable: as Barcelona pressed, Glasgow had ten players inside their own area, only Kirsty Howat not joining them – occupying a lonely island near the half way line.

And for all the players in there, Barcelona still escaped them. The tall No 10 Andressa Alves attacked on the left again, rolled the ball under her studs and pulled it across the area. Arriving by the penalty spot, Mariona Caldentey dummied it and Aitana Bonmati slotted home the second unattended. Three minutes later, they had a third. A perfectly weighted pass from Vicky Losada played in Caldentey and, although Alexander moved swiftly to block, Patri Guijarro followed-up to score.

The second half brought much of the same. Leila Ouahabi struck wide; Caldentey headed past the post; then Alves could not control Caletney’s ball inside the six-yard box. A series of corners yielded little, but still they came, still the ball circulated at Catalan feet. When it reached Alexander’s hands on 68 minutes it inexplicably slipped through, Alves’s shot from the edge of the area escaping her grasp and ending up in the net.

Next Marta Torrejon’s shot skidded through and into the net. Natasha Andonova then thumped one off the bar, but there were no more. Five was enough fun for Barcelona for one night.