For both Darth Vader and Pep, when it goes wrong, it tends to be for the same reasons 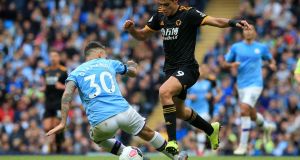 There are many issues with Return of the Jedi, not the least significant of which is the fact that it ends in essentially the same way that A New Hope did. Perhaps there are technical differences between the deficiencies that render the Death Star vulnerable in the two films, but fundamentally, it can be taken out by Rebel fighters landing a single accurate shot. As the X-wings were to Darth Vader, so Teemu Pukki, Todd Cantwell, Raúl Jiménez and Adama Traoré are to Pep Guardiola. For both Darth and Pep, when it goes wrong, it tends to be for the same reasons.

This is not to suggest Guardiola is inclined to the dark side, or that he is doomed to failure, but just to note that he and Vader share certain characteristics. Both are ambitious technocrats who dream of the creation of an all-conquering machine. Both expend vast amounts of money and expertise in bringing their visions to actuality. Both have created awesome weaponry that can obliterate opponents, whether Alderaan or Watford. Yet both cannot help but leave in their destructive creations a fatal flaw. Bournemouth nearly exploited it. Norwich did and on Sunday, in winning 2-0 at the Etihad, so did Wolves.

Perhaps the flaw is unavoidable. Perhaps it is even necessary for the functioning of the machine’s attacking capability. But it is there, nonetheless. City will rack up huge numbers of goals. They will dominate sides so utterly that they can keep clean sheets by keeping the ball. But they will always be vulnerable to teams who can beat their press, who can run in behind them, who can make their back four turn, who can make their defenders defend.

A high line lets City control possession and facilitates their attacking might but it always gives opponents a chance. It may even be that that sense of fragility is part of what makes Guardiola’s football, at its best and when you leave aside the grim financial underpinning, so appealing: that it feels doomed, ethereal, transient. Perhaps something in Guardiola, even, relishes that sense of jeopardy. That’s the highfalutin explanation. More prosaically, there is Nicolás Otamendi.

An issue that was always there for City has been worsened by what increasingly appears the club’s first major recruitment error since the signing of Claudio Bravo. In retrospect, the potential problems in central defence were apparent towards the end of last season. Vincent Kompany played eight of the final 11 games of the league campaign. At the time, the tendency was to regard that as an appropriate farewell for a long-term club captain, and to celebrate how his calmness and authority helped steady any possible nerves among the rest of the squad. While that wasn’t untrue, it perhaps was the case that Guardiola had lost faith in John Stones and Otamendi.

The injuries to Aymeric Laporte and, to a lesser extent, Stones, have highlighted the folly of the failure to replace Kompany. Otamendi has been badly exposed. Were it just that he was uncomfortable on the ball and struggled with the requirement to pass the ball out from the back, perhaps it would be possible to work round the shortcoming, but, his confidence shot, he now seems to have lost the ability to perform the defensive aspects of the game as well. His lunge towards Jiménez as the Mexican striker skipped by him in the buildup to Traoré’s first goal was evidence of an extraordinary loss of control.

But that is just part of the problem at the back. Injuries mean that Guardiola has repeatedly had to improvise on the left, either with centre-backs (Laporte), midfielders (Fabian Delph and Oleksandr Zinchenko) or a player who would rather be playing on the right (João Cancelo). Wolves again and again troubled City with simple balls into the space behind the full-backs.

As Louis van Gaal has said, the biggest tactical problem for Guardiola is managing the surges of his full-backs so that both don’t go forward at the same time, or, if they do, making sure cover is offered by the deepest-lying midfielder dropping back so the centre-backs can spread. Fernandinho was a master of that but he is having to cover at centre-back while Rodri takes his place at the base of the midfield. On Sunday, the new signing (and it is perhaps more obvious with a Guardiola side because they are positionally usually so good) kept getting caught in no man’s land, neither pressuring the ball nor shielding the centre-backs.

Set plays are another issue, one more directly attributable to Guardiola’s preference for defenders who can pass rather than those who excel in the more traditional virtues. Put it all together and the result is a City that look susceptible in a way they didn’t even during their blip last winter. An issue of philosophical strategy has been exacerbated by questionable recruitment.

In Star Wars, it needed Luke Skywalker, in whom the Force was notably strong, to hit the vital external exhaust port. By Return of the Jedi, Lando Calrissian and a team of Rebel fighters are enough. The Death Star may still be formidable, but everybody now knows how to destroy it.