Liverpool get the wild night Klopp predicted against Salzburg

Salah saves defending champions after they gave up 3-0 lead 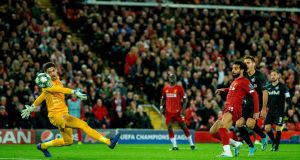 The wild night Jürgen Klopp had predicted appeared the product of an over-active imagination when Mohamed Salah put Liverpool into a three-goal lead. By the hour, with the newcomers on level terms at the home of the European champions, he found no pleasure in being proved right. Only in the final outcome.

Salah’s second goal of the game shattered Salzburg’s comeback and sealed Liverpool’s first win of the Champions League campaign after they had conspired to blow their early, convincing lead.

Klopp looked on aghast as his defence floundered against Salzburg’s belated recovery but at least in Salah he had the insurance of a proven finisher. With Napoli only drawing at Genk this was a satisfying, if trying night for the European champions.

New banners were required on the Kop for Liverpool’s first European appearance at Anfield since that unforgettable comeback against Barcelona in May. They still boast of “European Royalty” of course but are now adorned by a sixth European Cup.

Another little reminder to Salzburg of the considerable task they faced at a stadium hosting its 100th game in the European Cup/Champions League, and where Liverpool have not tasted defeat since Real Madrid’s visit in October 2014. The holders were on course for a 23rd consecutive home game unbeaten in Europe from their first incisive attack.

Liverpool’s intent was clear from Salzburg’s kick-off. Fabinho and Virgil van Dijk both adopted a sprinter’s crouch as they prepared to deny the Austrian champions time and space to produce the form that had led to 55 goals in their 12 previous outings this season.

Their team-mates responded in kind and despite an early chance for Takumi Minamino, who fired wide from 20 yards after Joe Gomez had been dispossessed, Salzburg’s four-man midfield was prised apart swiftly and ruthlessly by Liverpool.

Klopp’s side grasped the invitation to punish the visitors down both flanks. Roberto Firmino had just failed to connect with a Trent Alexander-Arnold cross from the right before Liverpool prospered on the left.

Andy Robertson found Mane and, with Salzburg players surprisingly backing off, the Senegal international drifted easily inside right back Rasmus Kristensen and exchanged passes with Firmino. The return ball from the Brazilian was, as usual, perfectly weighted and the former Salzburg striker slipped a confident finish past the advancing Cican Stankovic.

Mane’s celebrations were restrained against the club where he scored 45 goals in 87 appearances. But not so Robertson’s when he struck for only the second time in a Liverpool shirt to double the hosts’ advantage.

The Scotland captain enjoyed a fine game. His immaculate interceptions were on show to deny Patson Daka and Minamino inside the Liverpool area but he was also rewarded with an excellent goal at the end of a move he instigated.

Robertson, like Mane for the opener, drifted inside the Salzburg midfield without resistance to find Jordan Henderson. The captain released Alexander-Arnold and Robertson continued his run to the near post where he met the right back’s low delivery with a precise side-foot finish. It was his first Liverpool goal since May 2018 and the presence of a left back at Salzburg’s near post underlined the array of attacking threats unleashed by Klopp. And his opponents’ struggle to stop them.

Liverpool were in the comfort zone when Salah made it three with just over a third of the game gone. Too comfortable for their own good, it transpired. The Egypt international had produced several near-misses, prompting the home crowd to sing his praises in encouragement, when he was gifted a release by goalkeeper Stankovic.

Yet again Mane made space for himself on the left and picked out Firmino’s run into the area. The Salzburg goalkeeper saved the striker’s downward header but parried the ball back into the danger zone and into the path of Salah, who gratefully dispatched the rebound under a static Stankovic.

All over? Far from it. Jesse Marsch’s team had threatened only in flashes but unnerved the Liverpool defence and Gomez in particular whenever they did break in numbers.

The comeback commenced shortly before the interval when Henderson’s pass was intercepted and Enock Mwepu released the highly impressive Hee-Chan Hwang into the area. The striker’s first touch took him away from Gomez, he then cut back inside Van Dijk and beat Adrian with an emphatic shot inside the far post.

Liverpool, and Anfield, grew increasingly edgy as the second half progressed and the visitors’ confidence increased. Adrian escaped when Daka intercepted his casual clearance from Gomez’s backpass only for the ball to roll wide. Hwang steered a tame shot off-target from the edge of the area and Dominik Szoboszlai took too much time inside the area with only Adrian to beat.

Seconds later, however, Salzburg were back in it when a quick free-kick by Szoboszlai caught Liverpool asleep. Hwang picked out Minamino with an inviting cross and the right winger swept a fine volley past the Liverpool goalkeeper.

Salzburg’s celebrations were enhanced by the introduction of Erling Haaland, the prolific young striker who was left out of the starting line-up due to illness. Three minutes later, to the shock of Klopp and delight of the striker’s father Alfie, looking on from the Main Stand, he drew the Austrians level. Hwang and Mwepu combined to release Minamino and his low cross from the right by-line sailed beyond Van Dijk and Gomez. Haaland was left unmarked at the back post to tap into an empty net.

It fell to Salah to dig Liverpool out of trouble. Szoboszlai, too hesitant throughout, was beaten to a clearance by Fabinho and Firmino teed up his fellow striker with a delightful header into the area. Salah exploded on to the opportunity and gave Stankovic no chance with the finish. Liverpool departed, relieved and reprieved. – Guardian