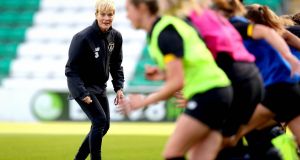 It is, says Ireland manager Vera Pauw, all about the scramble to be second best in a group that Germany seem more likely than ever to dominate. But, having spent some time on the training ground with her players over the past few days, the recently appointed Dutchwoman is adamant that her team will qualify for the European Championships – unless they end up in the play-offs and get seriously unlucky with the draw.

On paper, it should be Tuesday night’s visitors to Tallaght (kick-off 7.30pm, live on RTÉ2), Ukraine, who are in pole position to finish as runners-up, for it was they who were drawn into the group as second seeds. Two 8-0 defeats at the hands of Martina Voss-Tecklenburg’s side later, however, and everything looks to be very much up for grabs.

Pauw, who is boosted by the return to fitness of Manchester City defender Megan Campbell, admits that she does not yet know quite how the second of those two hammerings, inflicted over the weekend, will affect the visitors, but she seems supremely satisfied with the way her own preparations for the sold-out game have gone.

“It feels like I have been already here for months,” she says with a smile. “I think we’re absolutely ready. We have a few dots to put on the i’s [but] there are no excuses. We are going to qualify, definitely. After this week, at least for the play-offs. We may meet a very highly ranked team there but we will qualify for the play-offs.

“And this is why we mustn’t lose against Ukraine,” she continues, “because there is so much potential in this team. We cannot give it away tomorrow. If we cannot win, then we don’t give the game away. That’s what it is about.”

Colin Bell invested heavily in some of the younger players, and Pauw should reap some benefits from that

Early as it is for the new woman in charge, it will be an interesting and important test for Pauw. For all the progress made, there were not actually too many big wins under her predecessor, Colin Bell. It was a tough group last time out, in which Ireland were seeded to finish third, but that is precisely what they did and by beating the two teams ranked below them both home and away.

The hard-earned draw away to the Netherlands aside, there was actually not all that much to cheer about, with Bell inclined to put a lot of emphasis on the odd missed chance against the run of play in the bigger games as evidence that his players had passed up an opportunity.

That said, the former manager invested heavily in some of the younger players, and Pauw should reap some benefits from that. Ukraine may just have been unfortunate to have faced the Germans twice already but, as second-seeds go, they are not the Dutch, and an improved Ireland side will certainly see themselves as genuine contenders this time.

We will have a much better idea if they are right by the final whistle on Tuesday evening. Pauw has had her players practicing with the Under-15 boys from UCD in an effort to prepare them for the physical challenge tonight’s opponents will present. She has a point about her side needing not to lose, but they could really do with winning there before the tougher battles to come over the course of this campaign.