McClean expected to be available for Ireland’s Georgia clash 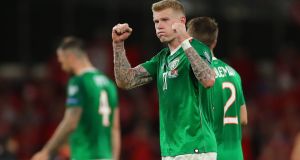 James McClean is set to be fit for Ireland’s clash with Georgia in Tibilisi despite training alone on Tuesday. Photograph: James Crombie/Inpho

James McClean did some light running away from the rest of the squad on Tuesday as he continued his recovery from the back problem that kept him out of the Stoke City squad at the weekend.

While everyone else took an active part in the first full training session of the week at Abbotstown, McClean worked on an adjacent pitch with one of the squad physios, Tony McCarthy.

The Derryman is expected to be available for Saturday’s game in Tbilisi despite his condition, which is bound to be a slight concern for Mick McCarthy who made it abundantly clear again on Monday just how important he feels McClean is to the Irish cause.

Even assuming McClean is available, the manager looks set to be forced into a couple of changes for the Georgia game. While that means opportunities for some of those who watched the Switzerland game from the sidelines, Alan Browne admits he has not done enough back at Preston North End to build on his goal against Bulgaria last month and leave Mick McCarthy with a real decision to make when it comes time to pick his starting 11 this weekend.

“I went back determined to break into the team and I have played a lot more games since then but it’s a slow process for me (with Preston) at the moment because the lads in front of me have been doing so well,” says the Corkman, who got 90 minutes in the 5-1 win over Barnsley on Saturday but at right back rather than in midfield.

“I don’t mind changing roles within the team, I can play wherever, but it’s been a tough season so far. I don’t think that’s down to what I’ve done but I think like here, the lads in front me have done well so I can’t be going to the gaffer and complaining.

“It’s different at club level, when the boys are doing well you are happy for them because you know that your chance is going to come whereas at international level, because it’s so broken up, it’s difficult to really break into the team because the gaffer doesn’t see you every week. I think I’ve just got to go back and nail down a position. As it is I don’t think that I have a leg to stand on, I can’t really can’t be coming in trying to say that I need to be playing because that’s not the case.

“Mick gave me a quick message after the camp, told me well done and said to go back to Preston and do as well as I could do. That is what I have tried to do. But obviously it hasn’t gone as well as I would have hoped.

“Coming away here now is still a big week for me, though,” he continued. “I’ll be looking to push the lads all the way and if I’m not involved then I’ll want it to go really well for them. Hopefully we can get the results that we need.”

1 Leo Cullen says rotation will be key as Leinster look to keep on winning
2 Paul Stirling’s heart over head decision to play on for Ireland bears fruit
3 Owens’s comments increase tensions ahead of FAI senior council meeting
4 Harding Park, named after a lousy US president who never stepped foot on it
5 GAA playing the long game as they await loosening of spectator restrictions
Real news has value SUBSCRIBE
Crossword Get access to over 6,000 interactive crosswords