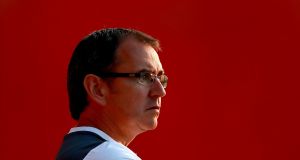 Pat Fenlon is to take over as general manager of Linfield. Photograph: James Crombie/Inpho

Almost 25 years after he first signed for the Belfast club as a player, Pat Fenlon has been appointed general manager by Linfield, the club he still believes is the biggest on the island of Ireland.

“I don’t think there is any that compares and I’ve been at most of the big ones,” he says. “That’s no disrespect to Dundalk, or Waterford or Cork City, anyone, but it’s a people football club and it’s got absolutely enormous potential.”

Fenlon’s new role will primarily involve improving the structures at the club and developing new revenues as it potentially moves towards a full-time set-up.

“They want to take the club forward over the next four or five years and I think they will look at a full-time set-up at some point. There is a strategic plan for all of that to be drawn up and a lot of other work to be done; it’s a big job but an exciting one.”

The 49-year-old, who spent two very successful seasons at Windsor Park during the mid 90s, says he expects to be well received. “I was always well treated there before and things were a lot worse then. Everyone has moved on a lot I think. The club had its identity and it’s important it doesn’t lose that but I wouldn’t have contemplated taking the job on if I thought there was going to be an issue.”

Fenlon starts next week by which time Declan Devine is expected to have been confirmed as Derry City’s new manager. The 45-year-old former goalkeeper, who has been working as a coach with the IFA’s youth development set-up and managing the Northern Ireland Under-15 side, was sacked by the club in 2013 but held talks over the weekend with a view to returning to the Brandywell where he is expected to be joined by Ruaidhrí Higgins and Marty McCann.

The vacancy, created by Kenny Shiels’s departure, attracted plenty of interest with Owen Coyle, Steve Kean and Lee Clark among those believed to have made contact.