John Delaney confident that under-21 Euros bid can succeed 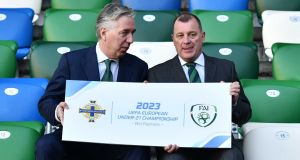 The intention of the FAI and IFA to bid together for the right to host the European Under-21 Championships in 2023 was confirmed in Belfast on Friday, where John Delaney expressed some confidence of success.

Delaney credited the IFA with having come up with idea, while his opposite number, Patrick Nelson, conceded that his association had not believed it had been in a position to go it alone.

Even between them the infrastructural requirements present something of a challenge, but the IRFU is said to have already provided assurances that the Kingspan stadium (Ravenshill) and Thomond Park will be made available if required, and it is expected that both would be used.

In the event that they do land the event the final would be north of the Border where Windsor Park and the Ballymena Showgrounds would also be venues. The Brandywell is ruled out because the event will be played on grass but the Derry stadium has an artificial pitch.

“As David Martin, the IFA president, came to us with the idea, we made a goodwill gesture for the final to be played in Belfast,” said Delaney. “There are plenty of other games, be it the opening match or others, if we’re successful.”

Given the mechanics of these things, Delaney’s position as chair of Uefa’s Youth and Amateur Football Committee seems sure to be a very significant factor in the process, and it is probably no coincidence that the two Irish associations appear to have accepted as inevitable the success of a joint bid by Hungary and Slovenia for the 2021 event and opted instead to stake an early claim for the next finals.

Hungary’s executive committee member Sandor Csanyi was Delaney’s predecessor in the youth chair, and he currently oversees and National Team Competitions Committee. He looks certain to have his day next month in Dublin when a vote takes place on those finals.

Meanwhile, the IFA has confirmed that it will bid to host the Super Cup in 2021. It previously attempted to land this year’s game but lost out to Istanbul. The capacity of Windsor Park, at just over 18,000, is seen as an issue with almost all of the venues used for the event much larger, although Tallinn hosted it last year when just 12,000 or so attended.

Helsinki in Finland, Kharkiv in Ukraine and Minsk in Belarus are the other likely contenders this time, with the final documentation due to be submitted in February.

With the deadline for the under-21s much further down the line, Nelson suggested that the bid was “ahead of the curve”, but Delaney seemed bullish about the prospects of it attracting favour from his fellow Uefa executive committee members when they make a decision in December 2020.

“I have tested this idea with people in Uefa to see what they would think,” he said. “There’s absolutely no doubt that uniting the round ball, with two associations on one island, and given the Brexit context, that it certainly has a uniqueness. It’s up to us now to ensure it’s a high standard bid. We’re not in this to come second or third. We’re in it to win, and I’m very hopeful.

“We have identified at least five stadiums in the Republic. There’s the Aviva Stadium, where we’d hope to play our matches, Tallaght could have a fourth stand by then, and Dalymount Park has been announced as a 6,000-seater costing €35 million, to be ready by 2022. There’s also Turner’s Cross and Thomond Park.”

The co-hosts will both be granted automatic qualification once, as expected, Uefa expand the tournament from 12 to 16 teams. That decision is due to be confirmed at a meeting in Dublin next month, where Tom Mohan’s long-suffering under-19 squad should get a belated break.

“There are discussions at Uefa about the potential to expand or align our under age tournaments,” said Delaney. “At present 16 teams play at the under-17 finals but only eight in the under-19s and 12 for the under-21 event.

“We’re at detailed discussions, including on the committee I chair, the Youth and Amateur Committee. There’s a top executive strategy meeting of Uefa in Dublin around the Euro 2020 qualification draw in December, so I think there will be some conclusion.”

Noel King’s departure as head coach of the under-21s will be confirmed in the next week. He has been in the post for eight years during which time he has overseen four campaigns but the team has finished outside the top two on each occasion. The FAI will be appointing a new manager for the next qualifiers kicking off in March.

“Noel is the current manager but that’s not for today,” said Delaney. “There’ll be an announcement next week on that.”

1 Gerry Thornley: Wild reactions to this Ireland team as fickle as the wind
2 Five Golf Classics for you to tee up at in 2020
3 Munster were fever-tested when they arrived in Italy
4 Mayo GAA cut contact with Tim O’Leary after ‘Horan Out’ tweet
5 Rick Reilly: Trump is the worst cheat ever on the golf course
Real news has value SUBSCRIBE
Crossword Get access to over 6,000 interactive crosswords