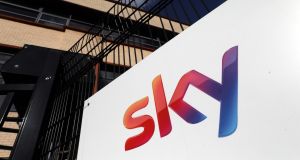 Sky will show a minimum of one gambling ad per commercial break from the start of the next Premier League season. Photo: Chris Ratcliffe/Bloomberg via Getty Images

Sky have responded to growing concerns about the number of gambling advertisements on television by announcing that they will show a maximum of one per commercial break from next year.

A spokesperson for the company confirmed to The Irish Times that the new directive announced in the UK would also carry across to Ireland, as will the new AdSmart system which is set to come in to use in 2020 to allow viewers the choice of cutting out all gambling advertisements on Sky channels.

Last month a number of leading figures in bookmaking and problem gambling services in Ireland called for some sort of restrictions on the advertisements and Sky have now become the first broadcaster to do so with the proposed Gambling Control Bill of 2013 – which will seek to regulate bookmakers – still stalled in Leinster House.

From the start of the new Premier League season next August the TV company will restrict the number of gambling advertisements to one per commercial break across 140 channels. This will curb the huge increases that have been seen in gambling advertising in recent years with in-play betting promotions the main driver.

During the recent World Cup in Russia the Guardian reported that a total of 90 minutes of betting ads – the equivalent to an entire football match – were shown on ITV alone during the tournament, amounting to 17 per cent of all total ad breaks.

In Ireland the Institute of Public Health says that there are more than 100,000 problem gamblers in the country. In 2016 gambling losses in this country totalled €2.1 billion which was the third highest rate of gambling losses per capita around the world, according to researchers H2 Gambling Capital.

Many have pointed to gambling advertising being a part of this problem and Sky have responded by also announcing that, from 2020, they will give viewers the option to exclude all forms of betting ads from commercial breaks with new technology in Sky boxes showing alternative ads. According to the broadcaster this will also apply to Virgin Media channels.

This is one of the first moves made in this part of the world to restrict gambling advertisements after many called for a watershed ban to be implemented, as they have in Australia. Since March of 2017 all gambling advertising has been banned during live sporting events in Australia and the Labour Party in the UK recently called for the same regulations.

Paddy Power co-founder and former chief executive Stewart Kenny is one of those who has called for a watershed ban and he told The Irish Times that the latest moves from Sky is the “first small step” in curbing the problem.

“These two initiatives are welcomes, as the bombardment of sports programmes with gambling advertising was normalising gambling for children,” he said.

“The limitation to one gambling advert for each commercial break is a first small step. But giving customers control so that they can block gambling adverts is a much more effective step. It will be welcomed by parents everywhere. While it is disappointing that it will not happen until 2020, Sky still deserve credit for this initiative.”

However, these new moves from the broadcaster will cover all of their channels in both the UK and Ireland.

Speaking after the announcement, CEO of Sky UK and Ireland, Stephen van Rooyen said: “Our customers are worried about gambling ads on TV – and we understand their concerns. That’s why we’ve committed to limiting the amount of gambling ads on Sky and better protecting those vulnerable to problem gambling.

“Thanks to regulation TV has long been a safe space, and these changes will make it even safer. But there is still a real danger online – and there will be until online platforms are regulated as tightly as TV.”

1 Gerry Thornley: Wild reactions to this Ireland team as fickle as the wind
2 IRFU not consulted prior to Minister Harris’ recommendation to cancel Ireland v Italy
3 Pep Guardiola believes Man City deserve some luck in Europe
4 Munster were fever-tested when they arrived in Italy
5 Dan Tuohy explains ‘rotten to the core’ comments
Real news has value SUBSCRIBE