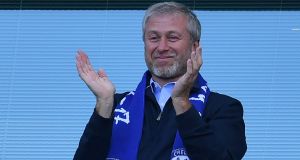 Encounters with Roman Abramovich are sufficiently rare for even the shortest or most nuts-and-bolts descriptions of them to take on weight.

Carlo Ancelotti’s brief recollections of his first two meetings with the Russian oligarch owner of Chelsea are interesting, therefore, simply for being written down.

Ancelotti says in his book, The Beautiful Games of an Ordinary Genius, that he first met Abramovich “around” May 2008 in Geneva, Switzerland – in May 2008 Avram Grant’s short tenure at Stamford Bridge was coming to an end.

Peter Kenyon, Chelsea’s chief executive, was with Abramovich, as was a lawyer, an interpreter and another unnamed executive. Plus, as Ancelotti added with an exclamation mark: “A lot of bodyguards.”

Ancelotti’s next meeting with Abramovich was two weeks later. This time Ancelotti reveals that it occurred in the Hotel George V in Paris and that the same group of people met him.

He had been struck by Abramovich’s knowledge of the game – and his passion for Chelsea – in the first meeting and the second confirmed this. In the first, Ancelotti says that Abramovich’s request/instruction was: “I want Chelsea’s style of play to be recognised around the world”.

In the second Abramovich complained that Andrei Shevchenko was “just not the real Sheva anymore”. And overall: “Chelsea just seems to lack personality”.

Here was an interesting emphasis on style.

The comments chime with a remark from another rare encounter with the Russian, this time via David Smith in the Observer in 2006. Granted a one-on-one sit-down with Abramovich – though no recording was allowed – Smith was told of the Chelsea owner’s authentic love for his new club and the sport itself.

“I am a fan of special nature,” Abramovich said. “I’m getting excited before every game. The trophy at the end is less important that the process itself.”

Imagine him explaining that notion to José Mourinho.

The idea that a man as powerful as Abramovich, coming from the often violent background of wild east economics amid the rubble of the Soviet Union, would cherish style over substance, process over delivery, seems difficult to comprehend.

But, if we take him at his word, maybe he has longed for style and substance in equal measure.

“He knew the game inside out,” says Ancelotti, whose opinion you would trust.

The thought arises then that just at a moment when Chelsea are producing some glorious, effective passages of football under the latest manager Abramovich has hired, Maurizio Sarri, the unpleasant irony for the Russian is that he is unable to witness this in the flesh, week in, week out.

Because Abramovich is in a form of exile from Stamford Bridge. We do not know when it will end or what the effects upon Chelsea will be.

Sarri is the 13th permanent managerial appointment since Abramovich flew in from Moscow to buy the club in 2003 – if Guus Hiddink’s two spells are included.

There have been good times, success, silverware. Chelsea have become recognised around the world.

But there is a dance to Sarri’s football over these past three months. The Italian plastic-fag smoker with a love of jazz is getting a tune out of just about everybody in blue. And Abramovich is missing it.

Chelsea, fifth last season, are unbeaten in the league, have reached the last eight of the League Cup and are motoring in Europe. In their last five matches, stretching across those three competitions, Chelsea have scored 15 goals.

Sarri, 59, possessing none of the entitlement or ego of a major former player, rather the quiet nous of someone who knows he has not seen and done it all, is part of the Chelsea attraction.

“My goal is to have fun as long as I am here,” he said at his unveiling.

Chelsea’s players and fans look like they’re having fun. And usually the TV cameras would pan to Abramovich outside his box to show him smiling along. No more.

The skip in Chelsea’s step is a contrast with the second half of last season when, as Conte began to see exit signs and some players considered a World Cup, the taut teamwork which had brought a title 12 months earlier gave way to defeats at Watford and Newcastle, home draws with West Ham and Huddersfield.

Last May did bring the FA Cup final win over Manchester United, but it was the same month Abramovich received news from the British government that his UK residence visa was not being renewed.

It was one of those unintended consequences – like the fall of the USSR – in this instance from the Skripal case in Salisbury.

There has long been a connection made between Abramovich and Vladimir Putin but Salisbury hardened perceptions – and official behaviour. All governments like money and are persuaded by it, but there are points when states feel violated. Salisbury was one, whereas deaths such as that of Abramovich’s former business partner, Boris Berezovsky, in Berkshire in 2013, was not, interestingly.

Berezovsky, a Putin opponent, was in exile in Britain. It is a way of living/surviving which Russian oligarchs have had to accept in the near two decades of Putin. Abramovich, though, did not face this.

He was spinning plates successfully until Salisbury, until May. Abramovich missed the FA Cup final, then news came that the Stamford Bridge expansion plan had been suspended and, after that, speculation of the sale of the club itself.

A man who would watch Chelsea youth team games in France, who would go to bars in New York to see matches with fans, who rescued Chelsea from the possibility of missing a £75m Eurobond repayment in July 2003, who wondered why Sheva wasn’t playing well, must have been disillusioned.

At that stage, the whole Chelski makeover funded by one man looked fragile.

This is what Sarri was walking into. On one side he had an owner whose geographical location was in question. On the other were players who had let a season slip. Sarri did not know Eden Hazard’s next move.

There was the sort of uncertainty that could have sunk Chelsea. There were enough excuses for players to flounder.

Yet here they are, flying. Sarri has held the centre and while he is being given praise, maybe he should be given more.

Where Abramovich is in all this, physically and emotionally, is unknown. He can see from afar that the latest edition of the club he bought does not lack personality. Part of him must be enjoying the process under Sarri, the style. But a part of him must be frustrated he is not in London to touch it, the substance.

And that means, for all Sarri’s excellence to date, Chelsea’s future remains as curious as the man who owns it.