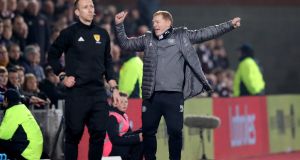 Odsonne Edouard scored a stoppage-time winner as Celtic shrugged off the departure of Brendan Rodgers to beat Hearts 2-1 and retain their eight-point lead at the top of the Scottish Premiership.

Now managed by Neil Lennon on his return to the club, the visitors had struggled to assert their authority at Tynecastle despite Hearts being reduced to 10 men for the final 35 minutes.

James Forrest had struck Celtic in front in the 36th minute but Oliver Bozanic equalised from the penalty spot 11 minutes into the second half after a foul by Kristoffer Ajer.

Hearts had Jamie Brandon sent off in the 55th minute for violent conduct but Celtic could find no way through until Edouard dramatically touched home his 17th goal of the season in added time.

The news will have come as a major blow to nearest challengers Rangers, who looked set to narrow the deficit after brushing aside Dundee 4-0 at Ibrox.

Glen Kamara and James Tavernier got Steven Gerrard’s side off to a stunning start with two goals in the first eight minutes then Alfredo Morelos added a third on 23 minutes.

With victory already effectively sealed, the home side eased down in the second half before Jermain Defoe added some gloss to the final scoreline with his side’s fourth in the 89th minute.

Hamilton bounced back from Sunday’s home humiliation against Rangers and boosted their survival prospects with a 2-0 win at Aberdeen.

George Oakley fired the opening goal for the visitors in the 34th minute and Mikel Miller completed a surprise win just before the hour mark.

Marc McNulty scored twice as 10-man Hibernian made it three Premiership wins in a row with a 2-1 win at ailing St Johnstone.

The home side, who went into the game on a run of six league games without a win, must have hoped for better after Christopher Kane gave them a 15th-minute lead.

McNulty levelled from the penalty spot after a foul by Liam Craig, but Hibs’ hopes were hit by the 68th-minute dismissal of Vykintas Slivka for a second bookable offence.

Despite their numerical disadvantage the visitors grabbed the points in dramatic fashion six minutes from time when McNulty fired home his second from outside the box.

Kilmarnock’s game against Motherwell was abandoned moments into the second half due to fog.

After a goalless first period visibility deteriorated during the interval and referee John Beaton was left with little option but to call the contest off.