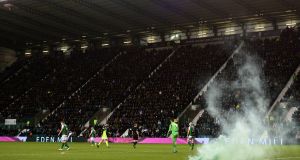 A flare on the pitch during Celtic’s 2-0 win away to Hibernian. Photograph: Mark Runnacles/Getty

In the second-half with the game still goalless and Hoops winger Scott Sinclair set to take a corner, referee Willie Collum removed a bottle that had been launched onto the pitch before play commenced and a flare was thrown on the field after Forrest’s goal had put the visitors ahead.

A statement from Hibs after the game claimed that “two bottles were thrown, one from each set of supporters”.

Lennon, who was struck with a coin last October when he was Hibs manager in an Edinburgh derby at Tynecastle, said: “It is a sore point of this season, whether it be bottles, coins, flares.

“It is just totally unacceptable.

“That should be safe environment for the players, they are entertaining the public, whether the Celtic public or the Scottish public.

“Officials, management; that should be a safe environment for us to come and work and enjoy our work.

“I don’t like to see it. It has got to be stamped out. It just happens far too often.

“That could really have hurt Scott and if it had, God knows what we would be talking about now.

“It must be a social thing, I don’t know. It is not on. We need to find the culprits, arrest them and punish them.”

The former Leeds boss said: “No one wants to see it. Wherever it has come from, we need to find whoever has thrown it.

“It seem to be happening too often just now and everyone needs to get behind it to they to stop it.

“It seems a little bit more up here but it still happens all over.”

The Easter Road club’s statement read: “We will review the CCTV footage and work with the appropriate authorities to identify those involved in throwing items onto the pitch.

“We understand two bottles were thrown, one from each set of supporters.

“This is entirely unacceptable and puts players and others at risk.

“The match was a good game, played in a great spirit but unfortunately yet again the headlines will be around this kind of unacceptable conduct.”