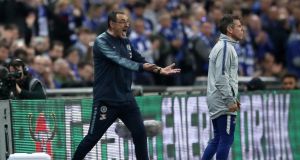 Chelsea manager Maurizio Sarri reacts as his goalkeeper Kepa Arrizabalaga refuses to leave the pitch after his proposed substitution during the Carabao Cup Final at Wembley. Photograph: Nick Potts/PA

Something astonishing happened in extra-time of extra time at Wembley. Kepa Arrizabalaga refused to come off the pitch. He was substituted by his manager. But then he wasn’t.

Instead Kepa just refused to leave the pitch. Three times Maurizio Sarri approached the touchline and signalled for him to go. Willy Caballero stood awkwardly, looking at his feet, a lime green gooseberry caught between his raging manager and a 23-year-old goalie who had just committed a footballing act of mutiny.

With the score 0-0 Sarri had wanted Caballero on to face the imminent penalty shootout. Kepa had just gone down with cramp but recovered. A brief crossing of wires was understandable. To refuse to leave the pitch after that is just unheard of.

Certainly not by Sarri, who flailed his arms wildly, screamed in rage, kicked things, wandered off almost down the tunnel. As the final whistle blew the manager was held back from engaging with his goalkeeper on the pitch by Antonio Rüdiger.

The Chelsea players huddled together, Pedro giving the team talk. And in that moment the feeling of a ship whose captain had briefly resumed the wheel over the previous 120 minutes was dashed completely.

Expected to find themselves eviscerated on this huge green spring-like pitch, Chelsea had instead grown into this game, had looked like a team finding itself.

Sarri’s selection and tactics had been spot on, a note of pragmatism when it mattered. As Kepa shooed him away with both hands, gesturing in front of the watching millions towards his manager as though shooing a troublesome uncle, the foundations began to shift and creak again, the stucco to fall away.

Poor old Sarri. This really was the final, and very public, indignity.

From a state of unexpected equanimity Chelsea were suddenly fraught, the players distracted, all that toxic internal politics flushed out on to the most public of stages.

Two minutes later Jorginho, who had also played well, had seemed to be finding himself, produced the most horrendous penalty miss in the first kick of the shootout. Kepa, who really shouldn’t do these things to himself, had dived over Sergio Agüero’s frankly awful penalty kick, a kick a man who’d just insisted on staying out there really should have saved.

Kepa did save one, leaping to one side to palm away Leroy Sané’s kick. But the story was set now. David Luiz missed. Raheem Sterling smacked the winning kick home. And a day that had looked like turning around the Chelsea ship just seemed to have confirmed the worst.

Poor old Sarri. This really was the final, and very public, indignity. You failed. Fail again, fail differently, fail better. And Sarri’s Chelsea did produce something different here. For a man who never changes, Sarri changed. The whole left side of his team, as brittle as a brandy snap in Manchester two weeks ago, was junked and replaced with the more diligent Willian and Emerson.

The first sight of Chelsea’s team had caused a mass social media sass at the sight of Eden Hazard as a false nine. At first glance this looked like a fairly horrible decision, a case of spiking your own most powerful gun by playing Chelsea’s key creative influence in a role he quite clearly hates.

At second glance it also looked like that. At third glance the penny dropped a little that, actually, this was where Hazard had played when Chelsea beat City 2-0 at Stamford Bridge.

A system badly implemented is always a bad system, and at the Etihad Chelsea’s players failed to press properly. Hazard did a lot of standing around while the game happened quite near him. Marcos Alonso might not be the greatest defensive left-back. With no cover he looks like a man viewing the game football through a film of extra thick custard.

No doubt Sarri will be accused of trying to save his job here in extremis with such pragmatism, probably by the same people who have painted him as some kind of absurd Monsieur Hulot type bungler for sticking to his own game plan previously.

And as the game entered its final third it was Chelsea who were starting to carry the weight of the play. Again Hazard ran at the City defence, beat two men and fed Pedro, who produced a horrible hybrid of cross and shot just as Chelsea might have been winning the game. On his touchline Sarri barked and cremated and yowled and clenched his fists.

And as the second half wound down there was a feeling of something emerging, a shape beginning to clarify, something that looked a bit like a working Chelsea team.

It was a story that looked to be going one way. At which point enter Kepa and a moment that left Sarri looking more isolated than ever; betrayed, perhaps terminally, by the most unprecedented of public humiliations.

1 Betting shops face uncertain future as they prepare for Monday reopening
2 Liverpool could seal title win at Anfield when they host Crystal Palace
3 GAA club matches to return on July 31st with intercounty games in October
4 Andrew Porter: Chasing Cheika will keep me on my toes as ‘holidays’ arrive
5 Connell losing touch with club championship is real tragedy of Normal People
Real news has value SUBSCRIBE