Michael Walker: For Liverpool, this is the one 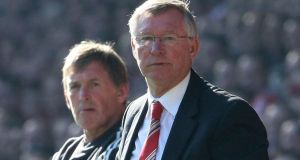 United’s Alex Ferguson and Kenny Dalglish of Liverpool during a league match at Anfield on October 15th, 2011. Photograph: Getty Images

When Manchester United and Liverpool walk out at Old Trafford on Sunday, it will be to the soundtrack of This Is The One.

The Stone Roses released the song in May 1989. It coincided with the end of a football season which, on very different levels, was disturbing for both clubs. Liverpool had just experienced the trauma of Hillsborough; then they lost the league in the last seconds of the last game at home to Arsenal.

United, meanwhile, were floundering. While Liverpool were deprived by a fraction, United were coming in 11th, miles behind, sandwiched between Millwall and Wimbledon. Against the latter in May, there were 23,000 at Old Trafford.

Some 2½ years into his tenure, Alex Ferguson was groping around for a playing system and club culture that would work. He was struggling and Martin Edwards was looking to sell the club.

Whereas Liverpool would regroup to reclaim the title 12 months later, United got worse. They trundled in 13th in the league, though they won the FA Cup, which bought Ferguson some more time.

So it was that in May 1990, Liverpool were champions for a record 18th time and Manchester United were 23 years into their league-title drought.

Liverpool were supreme, as they had been for the guts of two decades. English football was red – Liverpool, Arsenal, Nottingham Forest – while Manchester United and Alex Ferguson were red-faced.

Limping in 13th – imagine? – as Liverpool finished first again and looked down on their noisy, directionless neighbours 30 miles along that ship canal. This is why a dozen years later Ferguson used the word “perch” with such vehemence.

Well, it is partly why. There were other factors, other personalities, the passage of time, Scotland; but Anfield’s 1980s dominance was the context.

Ferguson’s great achievement was to reverse that supremacy. Thus when Jurgen Klopp walks up the Old Trafford touchline on Sunday, he will be the latest Liverpool manager trying to catch United’s title haul.

It was such an incredible thought back in 1990 – Liverpool into year 29 without the title – that no one thought it. But here we are.

And now there is the chance to end it. Liverpool are second in the Premier League to Manchester City on goal difference with a game in hand. Yes, this is the one.

Were Liverpool to win at Old Trafford they would hurtle into their home game with Watford on Wednesday night and the Merseyside derby at Goodison Park next Sunday.

Were Liverpool to lose at their greatest rivals they would worry about Watford and might not want to think about Everton.

It is about attitude, perception, which is how it was the day Ferguson uttered the “perch” word.

It was late September 2002. Ferguson and your correspondent were sitting above the foyer at United’s Carrington training ground. The Premier League season was seven games old, and United had won three, drawn two and lost at home to Bolton and away to Leeds.

After the Leeds defeat, which was Rio Ferdinand’s raucous return to Elland Road following his £30 million transfer to Old Trafford, Ferguson’s team were ninth, already six points behind Arsenal.

The Gunners were reigning champions and had clinched the League at Old Trafford the previous May. Liverpool, under Gerard Houllier, had finished runners-up.

So when both they and Arsenal began the next season undefeated, as United lost a couple, there was a sense of power shifting. One person who voiced this publicly was Alan Hansen.

Hansen, of course, was a former Liverpool player who accumulated no fewer than eight of those 18 league titles, plus three European Cups. He won, however, a disappointingly small number of Scotland caps – 26 – and was omitted from Scotland’s 1986 World Cup squad.

Ferguson had been appointed temporary Scotland manager following the death of Jock Stein at the vital Wales-Scotland qualifier in Cardiff in 1985. Hansen had been due to play in that game but withdrew from the squad 48 hours before kick-off injured. Or, as Ferguson recounted, Stein said to him: “You’ll not believe this, Hansen says he is injured.”

Hansen’s loyalty to Liverpool meant he endured some abuse from his countrymen, and a measure of his feeling was his remark after Liverpool had beaten Aberdeen – Ferguson’s Aberdeen – in the 1980 European Cup. “I never performed with as much aggression as I did in that game,” Hansen said of the 4-0 second leg at Anfield.

You can be sure that when Ferguson arrived at Old Trafford and Liverpool were still winning leagues, Hansen and the Liverpool manager, Kenny Dalglish, enjoyed the view. (Having been selected for the 1986 World Cup by Ferguson, Dalglish withdrew injured.)

Scottishness fuelled the Liverpool-United rivalry. After retirement, Hansen became the main BBC voice, and famously said Ferguson would “win nothing with kids” after the blooding of the likes of Beckham, Butt and Scholes.

Ferguson was to point out Hansen had forgotten something called the Busby Babes. He was keen to prove Hansen wrong again years later when these defeats to Bolton and Leeds left United looking troubled.

Hansen boldly declared this to be “the greatest challenge of his [Ferguson’s] career.”

Sitting face to face with Ferguson across a low coffee table at Carrington, it seemed politic to discuss other matters first. United were getting some stick and there were gripes about two of his foreign signings, Juan Veron the previous summer, and Diego Forlan in January.

Roy Keane, post-Saipan, had got sent off at Sunderland for elbowing Jason McAteer, and was injured. Paul Scholes and Gary Neville were also out.

Pressure was mounting. Ferguson’s response to this collection of doubts was measured: “I don’t get paid to panic. We have had plenty of stuttering starts.”

When he mentioned Keane’s elbow at Sunderland, Ferguson said it was “like a wee schoolboy dig”. When this opinion was greeted with circumspection, he added: “Well, it wasn’t ‘take that, ya bastard’.”

This was a more Glaswegian analysis. And that tone continued when Hansen’s “greatest challenge” statement was put to Ferguson. He met it like Keane met Alf-Inge Haland’s right kneecap.

The Guardian did and hence an unthreatening little word, “perch”, came to be loaded with malevolence.

But by Christmas United were third and Liverpool, hiccupping, were fifth. In April, the business end of the season, Liverpool went to Old Trafford and lost 4-0 – a certain Ole Gunnar Solskjaer getting the fourth.

The next week United went top. The next month they won the title. Liverpool watched on, as forlorn and frustrated as Ferguson had been years earlier.

United had claimed an eighth Premier League; it put them on a perch.

They have slipped off it post-Ferguson, but a consolation is that Liverpool have not climbed onto it.

Now, though, Liverpool might be about to. Klopp’s challenge has a credibility other Liverpool leaders have lacked. Sunday should see a special renewal.

For Liverpool, this could be the one.