Dundalk manager led his side another league title in debut season 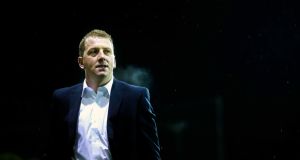 Vinny Perth led Dundalk to a League and League Cup double as well as wins in the President’s And Unite the Union Cups in his first season in charge.

Dundalk manager Vinny Perth has been named as the Airtricty/Soccer Writers’ Association of Ireland Personality of the Year for 2019 at an event in Dublin.

The 43 year-old, who succeeded three times former winner of the award, Stephen Kenny, as manager of the Oriel Park outfit at the end of 2018, led the club to a League and League Cup double as well as wins in the President’s And Unite the Union Cups in his first season in charge.

The Dubliner impressed in the role with the team overcoming a slow start to their latest title defence to beat Shamrock Rovers into second place by 11 points. The meetings between the two clubs were decisive with Dundalk taking 10 points from a possible 12 before losing the FAI Cup final to their rivals on penalties.

His team’s title winning tally of 86 points was just one short of the figure achieved 12 months earlier and was better than the totals achieved by what was then Kenny’s side in the first three successes of his time in charge.

Rovers manager Stephen Bradley and midfielder Jack Byrne were among the others to make the shortlist of six for the award. Dundalk players Sean Gannon and Chris Shields also made the final round of voting along with Bohemians manager Keith Long.

Gary Rogers won the Goalkeeper of the Year award again after what was an outstanding season for the 38-year-old.

There were doubts about the former Sligo Rovers and St Patrick’s Athletic players future at Dundalk through much of the campaign with the club apparently reluctant to extend his stay into 2020 but he played almost every game of a hugely successful season and his form eventually made the case for a new contract more or less unanswerable.

Rovers’ Alan Mannus and James Talabot of Bohemians were the other contenders.

The association’s Special Merit award went to Michelle O’Neill, the Irish referee who had a stellar 2019, a year during which she was part of the team that officiated at the women’s World Cup final and men’s Uefa Super Cup.

Former international goalkeeper Packie Bonner was honoured for his contribution to the Irish game with a Hall of Fame award. The now 59 year-old played 80 times for the national team over a decade and a half and featured in two World Cups and Euro’88. He subsequently worked with the association and has been linked with a return to the organisation as it emerges from the aftermath of the John Delaney era.

Dan Tuohy explains ‘rotten to the core’ comments 18:08
Serie A matches to be played behind closed doors due to coronavirus 17:54
Sam Bennett sprints to second in stage two of the UAE Tour 15:55
Northern Irish FA ban children aged 12 and under from heading footballs 15:18
Panorama show Mo Farah changed account to anti-doping investigators 14:41