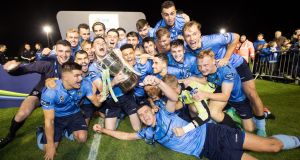 Though there are those who feel they were made for the second tier where they can quietly get on with producing players for others, UCD prefer to see themselves as setting slightly different standards. This was one of those nights when everything they have aspired to since the days of ‘The Doc’ somehow came together.

The point they secured thanks to a lovely, late Conor Davis goal was enough to bag them both promotion and the first division title. Even as the celebrations continued on the pitch, a few of the officials at the league’s self-styled big boys will have been feeling weary; calculating the impact on next year’s budget of two home games with next to no away fans.

The Students make no apologies, though. There is a confidence around the club about what they bring to a league in which few can claim to have had such a trouble-free existence. So, if no-one likes them . . . frankly, they don’t care.

“The lack of fans is always a stick to beat us with,” said manager Collie O’Neill on a night, as it happens, when a thousand or so turned out in the hope of seeing them go up. “But what we have at this club in terms of facilities, in terms of our strength and conditioning and the way we do things is better than most of the clubs in the league.”

It is, he says, a big part of the reason he was able to keep what he believes to be the best group of players he has worked with together and why, he maintains, they will be well able to hold their own in what should a tighter, tougher Premier Division than the one they were relegated out of four seasons ago.

“A lot of the players could have gone this year if they had wanted to but they said they wanted to be here and I think they will want to be here next year too.

“We knew we’d be there or thereabouts at the start of the season. A few of the others might have doubted it, they might have thought: ‘It’s only UCD, they’ll fall away’ and maybe that’s the reason nobody threw money at it.

“But there was no Waterford so we thought we would be in with a shout and I’ve no doubt whatsoever that we’ll be able to cope next year now; we showed it last week when we beat Waterford [in the FAI Cup] . A lot of our players have already shown that they could cope in the Premier Division but once the others get a couple of games under their belts, they will okay too.”

They certainly showed the sort of character here that will serve them well. Harps, who hadn’t been beaten in the league since the last time these two sides met arrived needing to win to keep alive their own hopes of avoiding the playoffs. And though they couldn’t quite pull it off, they gave their hosts a scare.

Having fairly consistently created the better chances in an open and entertaining game, they finally converted one 10 minutes from time when Keith Cowan forced home Gareth Harkin’s corner at the far post.

The visitors hardly had the time to think about how they might go about defending their newly established lead when it was suddenly gone. Almost from the kick-off the Students scored with Davis producing a terrific first touch to both take the ball and push past a defender before firing past Ciarán Gallagher.

With results elsewhere going their way, Harps will at least be spared having to slug it out in the opening playoff and if they play as they did here, they will not be daunted by the prospect of facing either the winners of that or the Premier Division side that would come after. For UCD, though, the net concern will be a cup semi-final in what might yet be an even more memorable season.