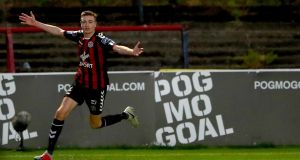 Cork City will require a minor miracle if they are to be crowned league champions for the second year in succession after an excellent performance from Bohemians put a major dent in their title ambitions at Dalymount Park.

Bohemians were intent on pressing Cork City and putting pressure on the Cork City defence and the Phibsborough outfit had both Damien Delaney and Cork City goalkeeper Peter Cherrie to thank as they built up an early lead. A stray back pass from Delaney made its way into the net past a shell-shocked Cherrie, which resulted in the visitors chasing the game from the early stages.

Delaney will want to forget this game as soon as possible after the former Ireland international was beaten far too easily by Daniel Kelly for Bohemians’ second goal.

The game was effectively over as a contest in the 29th minute as Delaney again was robbed of possession by Keith Ward, with the attacking midfielder picking out Kelly with an excellent pass and the right-sided winger added his second goal of the game with a finish from close range.

Delaney was subbed at the interval, with both sides exchanging a goal before half-time, as Graham Cummins kept Cork City in the game with a header, before Bohemians full back Derek Pender put the result beyond doubt on the stroke of half-time.

Jimmy Keohane’s header made its way to the back of the net in the early stages of the second half but that was as good as it got for Cork City, as Bohemians held out for a deserved 4-2 victory.

Ronan Finn and Greg Bolger found the net with spectacular strikes in the pick of the goals as Shamrock Rovers routed an abject Limerick at Tallaght Stadium.

The only consolation on a night to forget for ninth-placed Limerick was that bottom side Bray Wanderers, whom they travel to next week, lost at Waterford.

Skipper Finn cracked home the opener from 30 yards after just 90 seconds when a Dylan Watts corner was cleared to him.

Another corner brought Rovers’ second goal 10 minutes later, Watts playing it straight out to Bolger who found the net with an equally stunning strike from distance.

Watts got on the scoresheet on 19 minutes when his deflected drive looped over the stranded Jack Brady, who was making his league debut for the visitors.

Finn drilled a shot against the butt of a post early in the second half prior to adding his second goal of the game on the hour.

Aaron Greene’s header from the impressive Watts’s cross was parried out by Brady for Finn whose close-range shot found the net.

Waterford kept on the coat-tails of third-placed Shamrock Rovers by easily accounting for basement side Bray Wanderers.

Alan Reynolds rung the changes from the Blues side dumped out of the FAI Cup by UCD last week and one of six to profit, Estonian midfielder Sander Puri, broke the deadlock seven minutes before the break.

Another international, former Ireland striker Noel Hunt, wrapped up the points with a second on 73 minutes.

Bray had lost all eight matches since claiming their last point in a draw with Waterford in July and took until 15 minutes from the finish to get their first effort on target.

They were outplayed from the early stages with Puri in the thick of the action.

He fired over from the edge of the box before failing to connect with an audacious overhead kick six yards out from Noe Baba’s cross.

Puri was also involved in the incident which led to Bray losing Evan Moran.

The goalkeeper was unable to continue following an aerial challenge from Puri and the first duty of his replacement, Mark O’Connor, was picking the ball out of the net.

Puri, just back of international duty, latched onto a through ball by the lively Corey Galvin and lifted his shot over the advancing newcomer.

Hunt had a goal harshly ruled out for offside early in the second half but eventually seized upon a defensive error to volley in on the turn from close range.

Seán Moran: Let’s leave the confusion aside and enjoy this All-Ireland 06:30
Gordon D’Arcy: Ireland don’t need to do a Finn Russell on it 06:00
Beibhinn Parsons ready to move on the next level 06:00
CJ Stander ready for Italy after lockdown sheep battles 06:00
Aki, Ringrose and Henshaw: Brian O’Driscoll has his say on Ireland’s midfield riddle 06:00