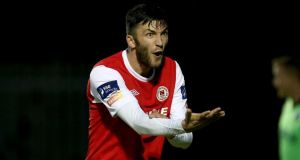 Moving another step towards a first league title in 19 years will be something St Patrick’s Athletic will be determined to prevent Dundalk taking at Richmond Park tonight.

Third in the table, 11 points behind the leaders with seven games to play, the current champions’ reign may be all but over. But having the champions-elect, who won 4-1 in Inchicore back in April, lording it over them would be tough to take.

“If they beat us tonight they would pretty much have the league won, I feel. So we don’t want that,” said St Patrick’s midfielder Killian Brennan.

With Derek Foran and Ian Bermingham back from suspension, St Patrick’s hope to be back to full strength.

Cork City winger Billy Dennehy is struggling with a hamstring injury ahead of the visit of former club Shamrock Rovers to Turner’s Cross in the night’s other big game.

Rovers welcome midfielder Gary McCabe back from suspension but remain without the injured David O’Connor and Ryan Brennan.

A back injury again sidelines striker Rory Patterson as Derry City meet Sligo Rovers at the Brandywell. Former captain Clifford Byrne has left the club by mutual consent while midfielder Danny Ventre is out having had surgery on a knee.

Sligo are without suspended central defender Gavin Peers and John Russell is an injury doubt.

Martin Russell will hope the experienced defensive trio of Samuel Oji, Stephen Folan and Robbie Williams, will be passed fit as he returns to UCD as Limerick manager.

Bottom side Athlone Town have Eric Foley back from suspension at Drogheda United, though injuries continue to sideline Aidan Collins, Stephen Quigley and Graham Rusk.

Ciarán McGuigan and Gavin Brennan are suspended for Drogheda.