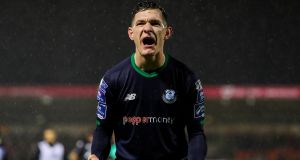 Shamrock Rovers moved 10 points clear at the top of the table with a polished performance to outclass Cork City at Turner’s Cross on Friday night.

The visitors were a lot better in the early stages and they deserved the lead when it came on 22, Seán Kavanagh turning in a Greg Bolger cross. Ronan Finn hit the bar in the wake of that, though City were unucky to have a Graham Cummins effort ruled out for offside.

Seven minutes before half-time, Aaron McEneff made it 2-0 with a deflected effort, but Dan Casey had City back in it just before the break when a corner wasn’t properly cleared. They were unable to force quality chances on the resumption though and McEneff got his second with a 25-yard shot just after the hour. From there, Rovers weren’t going to be denied.

As they did in last year’s FAI Cup quarter-final, UCD outplayed Waterford once again to run out emphatic winners at the UCD Bowl.

UCD took the lead from a Gary O’Neill penalty on 21 minutes after he’d been upended by Blues skipper Damien Delaney. They doubled their lead three minutes later. O’Neill’s free kick came back off the crossbar and Yoyo Mahdy reacted quickest to head the ball to the net.

Zak Elbouzedi shot against a post at the other end before Waterford struck on 37 minutes. UCD keeper Conor Kearns could only parry a shot from Aaron Drinan to give Scott Twice a tap in.

Harps were reduced to ten men on 37 minutes after Colm Deasy’s reckless tackle on Ciaran Coll, the former Harps captain.

City broke the deadlock on 51 minutes when the ball fell to Aidy Delap who let fly with a screamer from just inside the box. Harps’ never-say-die attitude was rewarded on 74 minutes when former Derry player Nathan Boyle squirmed his way into the area to score. But Derry restored their lead on 83 minutes with David Parkhouse heading home.

And a mistake in injury time enabled Parkhouse to and steer the ball into an empty net to make it 3-1. Harps got a consolation from the penalty spot through Mikey Place with the last kick of the game.