Mohamed Salah puts Liverpool back on top at Southampton 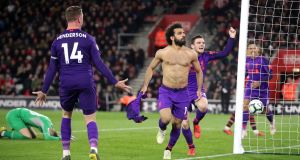 If this is to be Liverpool’s year then it may actually prove to have been an underlying resilience and ability to bounce back from set-backs within games, rather than a dazzling forward line or stingy defence, that sees them home. They were rarely at their best on the south coast but, confronted by awkward opponents forcing themselves clear of trouble near the foot, they still prevailed to move two points clear. It is nights like these which can make the difference.

Not that the visitors’ ability to recover from a deficit to move back ahead of Manchester City in this hypnotic title race should have come as a surprise. Liverpool had conceded first to Burnley recently, and again at Bayern Munich in the Champions League. They had cracked to suffer potentially damaging equalisers to Fulham and Tottenham Hotspur. Yet each time they had found a way to win.

This, courtesy of Mohamed Salah’s first goal since mid-February and Jordan Henderson in the last 10 minutes of a frenetic occasion, would be no different. The latter’s had been his first of the campaign, slid in from close-range from Roberto Firmino’s low centre to leave Jürgen Klopp hopping in delight on the sidelines. His team refuse to blink first in this tussle at the top. Emerging from contests this tight will only pep belief that the long wait is almost over.

This had been played at breakneck pace from the outset, a duel to savour even with the clubs’ contrasting priorities at opposite ends of the table. Southampton, rather than soaking up their opponents’ possession and clogging up the final third, had been impressively enterprising in their eager bursts up field. Liverpool, initially winded by the aggression of their hosts’ start, had taken time to recover their poise but, in the slickness of their own approach play, spread anxiety with every foray into enemy territory.

They had departed at the interval apparently in the ascendancy having recovered the deficit shipped early on. Klopp’s side had struggled horribly to cope with Southampton’s intensity in those breathless initial exchanges, as Ryan Bertrand and Nathan Redmond tore down the left flank and Yan Valery mirrored their ambition down the right. Liverpool had been dizzied by the flurry of openings that aggression yielded, and had duly trailed from the ninth minute to another source of eager running.

Shane Long is never prolific these days, but the goal the Irishman prodded here from the edge of the six-yard box had completed an unlikely half-century in the Premier League. His reward was born of Bertrand’s cross from deep, arced over an uncertain Joel Matip for an untracked Pierre-Emile Hjøjbjerg to flick on beyond Virgil van Dijk’s jump. There loitered Long, with Andrew Robertson distracted by James Ward-Prowse’s run and Naby Keita slow to react, to collect and convert only a second league goal.

Southampton had gone over five hours of football against these opponents without netting – Sadio Mané had actually been their last scorer in this fixture, three years ago – and even threatened to make further inroads while Liverpool were gripped by panic. Alisson’s self-destructive eagerness to play short did them no favours.

Yet, by surviving that near-miss, Klopp’s team seemed to steel themselves to rise to the challenge. Mané should have drawn them level, forcing Angus Gunn into a fine instinctive save to his left as the Senegalese met Mohamed Salah’s centre. Naby Keita, who had played for Ralph Hasenhüttl at Red Bull Leipzig, clipped the outside of the post from the rebound, but he would not be denied his first Liverpool goal for long. Southampton had heaved but failed to clear their lines nine minutes from the break but, when Alexander-Arnold summoned a fine centre, there was the midfielder to nod through Gunn’s attempt to save down at the foot of his upright, the ball bouncing in over his outstretched arm.

The home side could bemoan the failure of an assistant referee to notice Salah marginally offside earlier in the move, though their marking, like that of Liverpool earlier in the piece, had left much to be desired. The sloppiness actually added to the drama, with the ball surrendered far too readily in midfield by both teams and neither side able to exert any kind of control on a frantic contest. Maya Yoshida might have conceded a penalty after sliding in rashly and making contact with Keita as he bustled alone into the box – the ball may have run away from the though the centre-half would subsequently summon a fine block to suffocate Firmino’s close-range volley.

That reflected the shift in momentum as Liverpool frantically pursued a winner to set them apart at the top, though there was a certain irony that, when they did eventually force themselves ahead, the lead was secured on the counterattack. Twice Southampton had flung crosses into the box, the first from a corner, before the substitute Jordan Henderson headed clear and Salah gathered inside his own half. The Egyptian charged up field in possession, sprinting mercilessly at a back-tracking Bertrand, before spurning the chance to supply Firmino and, instead, fizzing his shot into the corner of Gunn’s net.