Gracia grateful his risky move to Watford is paying dividends 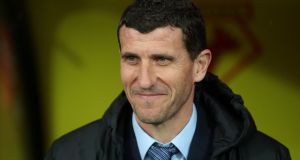 Watford manager Javi Gracia: has guided his side to eighth in the Premier League table and an FA Cup semi-final against Wolves. Photograph: Peter Cziborra/Reuters

Javi Gracia has admitted that becoming Watford’s manager was a risk that carried the potential to derail his career.

The Spaniard was aware of the owners’ reputation for unceremonious sackings and he took over a struggling team in January 2018 after Marco Silva’s spell as manager unravelled.

Gracia had failed to impress in his previous post, at Rubin Kazan, and another failure might have significantly reduced his future options.

Instead as his first full season at Watford draws towards its conclusion his side sit eighth in the Premier League, are preparing for tomorrow’s FA Cup semi-final against Wolves, and Gracia’s reputation has been burnished rather than blemished.

“I knew about it when I came here,” Gracia said of the perception that the club had extremely limited patience with managers.

“I think to be a coach is always to have risks but you always have the confidence you will be able to do it well. That was my opinion in that moment, it was my decision, and I’m very happy I came here.”

Gracia, having started the campaign among the favourites to be the first top-flight managerial casualty, last November became the first coach in the Pozzo family’s seven-year ownership of the club to extend his contract, which now runs until the summer of 2022.

“I’m happy because the club trusts me,” he said. “The people, the supporters and the players, all of them are enjoying and I am happy for that. People had different ideas about me in the beginning.

“That doesn’t make me happy. I am happy because I can feel all the people around me are enjoying the team. That is most important, not what some people say about you.”

Though an injury to Roberto Pereyra may stop Gracia from naming his first-choice XI, the manager’s principal selection issue is whether to keep faith in Heurelho Gomes, the 38-year-old Brazilian who has played every cup game this season and will retire at the end of the campaign, or to replace him with Ben Foster, who has played every league match.

“My opinion about Heurelho is that first of all he’s an amazing person and after that he’s a very good professional,” Gracia said.

“I have to choose only one keeper. It’s not easy but it’s my job and I’ll try to choose the player who will give us the best chance to win. Since the last game I have spent a lot of time thinking about the different options and solutions.”