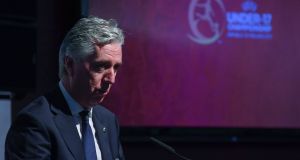 John Delaney, chairman of the Uefa Youth and Amateur Football Committee, during the Under-17 European Championships draw at the Aviva Stadium. Photograph: Stephen McCarthy/Sportsfile

John Delaney got to wear a couple of his many current hats on Thursday evening in Lansdowne Road as the draw was made for next month’s Under-17 European Championships.

There was also time for a brief moment of reminiscence as he addressed a crowd that included the great and good of Irish football and a few guests from further afield as the 51-year-old referenced “my time as chief executive”.

Members of the association’s board, some of whom have been invited to appear before the Oireachtas Committee for Transport, Tourism and Sport, took pride of place towards the front and centre of the crowd, where they were joined by Fianna Fáil spokesman for sport Kevin O’Keeffe, the only member of the committee who seemed to have accepted the FAI’s invitation to attend the draw.

When he spoke FAI president Donal Conway asked the crowd’s permission to take a moment in order to wish a few of the “distinguished guests” well over the course of the tournament and started with Delaney.

The pair departed shortly after the draw as the room was rearranged for a sit-down meal. A couple of the directors who stuck around declined to comment when asked for their take on recent events around the association.

In the hours leading up to the draw Waterford FC became the latest club to issue a statement of support. In it owner Lee Power thanked Delaney for his part in helping him take over the club, and then transform its fortunes.

The fact that Waterford are due to play in Europe this summer got a mention but not the controversy that surrounds the issue, while Delaney was also credited with increasing the association’s turnover from €5 million to €50 million during his 14 years at the helm when it was actually €20 million when he assumed the top job.

Ireland, as it happens, will (barring the fixtures being rescheduled for TV) play their second game of the tournament against the Czech Republic at Waterford’s RSC, with Colin O’Brien’s side also set to face Greece and Belgium in the group stages, with both of those games in Tallaght.

It is a tricky draw given that both the Czechs and Belgians have narrowly beaten Ireland over the course of this season, but could probably have been tougher when you look at the line-ups in Group B (which includes Netherlands, France and England) or D (Spain, Italy and Germany)

“There’s always going to be a group of death,” said O’Brien afterwards, and there are probably two of them this year with B and D. So two very big countries will not get out of their groups.

“But we’re very focused on ourselves. We’ve played two of the teams in our group, the Czech Republic and Belgium, but our main focus now is on Greece who came out of a group finishing second to Spain in the elite phase. That’s our first game, and we’ve been 10 months waiting for this. The next four weeks, now we can sink our teeth into the preparation.”

Team captain Seamus Keogh, who left Sligo for Southampton last summer, expressed the hope that home advantage would help the title hopes of a side that has secured some good wins in recent months, but would be effectively making their competitive international debut in their opening match.

“It’s a huge privilege playing in your back garden; it’s what you want to do, every young fella’s dream. We’re confident, we’re confident in our ability. We’ve had a very good season so far, and we’re happy with the draw. No team is easy, but come May hopefully it will all fall into place.

Fixtures are due to be confirmed next week.