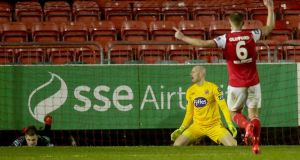 Dundalk lost ground on the league leaders here as Daniel Cleary’s own-goal gifted the home side a slightly unexpected win. The Dubliners will feel they were worth it, though, for the way they bettered then battled the champions in key areas. Their visitors will feel it things might have been different had they been at full strength.

Georgie Kelly might have salvaged a draw for them well into injury-time but his glancing header lacked power to beat Brendan Clarke. Seconds later Pat Hoban’s drive had plenty of that but flew narrowly wide with the goalkeeper nowhere. It had, to be fair, never quite felt like their night.

Having seen his side draw another blank at Bohemians last week, Harry Kenny shook things up, gave the three at the back another go and hoped Gary Shaw might make the most of the chance he was getting courtesy of Mikey Drennan’s suspension.

The striker worked hard without ever threatening much but the home side had the better of things in midfield until the losing stages even if they did then struggle to create genuinely clear cut chances further up the field.

The best of them prior to the goal came when Ian Bermingham capitalised on a Seán Gannon error and Conor Clifford had his shot blocked down; the most spectacular was also from the former Dundalk midfielder whose attempt at an overhead volley flew over but the key thing was the locals were more than holding their own ... if only they could find someone to provide a finish.

Help was at hand, it turned out, in the form of Cleary who became the Dublin club’s second top scorer in the league just before the break when he got to a low Rhys McCabe cross before Gary Rogers and left his goalkeeper no chance thanks to the contact he made.

The stadium announcer insisted on crediting the former Sligo Rovers man on the basis of his key role in the build-up but the supporters seemed to be deriving plenty of enjoyment from the defender’s discomfort as he picked himself up and made his way out of the area.

Dundalk have had some issues of their own with finishing this season but the problems here for the best part of the night were a little more fundamental with Perth’s side struggling to retain the ball, especially in the sorts of areas from which Clarke might have been made to work a bit.

The home side’s goalkeeper made one save of note from Michael Duffy early enough on then Daniel Kelly narrowly missed the target after the visitors had countered from a corner but they were generally out of sorts and took a very long time to get on the front foot.

As the game moved towards its closing stages, Hoban began get beyond his markers the odd time and Dave Webster did really well to turn a cross from Gannon over as the striker lurked behind him. Chris Forrester might just have easily made it two at the other end though with a low drive from the edge of the area that Rogers saved smartly.

In the end, the hosts didn’t need the extra cushion although their supporters could probably have done without the extra edge to added time.