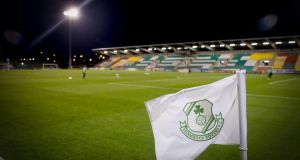 Shamrock Rovers have announced that the club’s football management and staff have agreed to take a temporary 25 per cent pay cut. Photograph: Oisín Keniry/Inpho

Amid ongoing doubts about the prospect of the League of Ireland or sport generally resuming fully before the end of the summer, Shamrock Rovers have announced that the club’s football management and staff have agreed to take a temporary 25 per cent pay cut.

There remains some optimism in the wake of this week’s meetings between Government and NGOs that elite-level athletes could be allowed to resume training in certain circumstances over the course of next month. But there is an ongoing sense that it will be at least September before crowds are allowed, in an unrestricted way, to attend matches, a key element of the league resuming given that it has no really significant broadcast income.

“Getting the players back training would be great in itself,” says Stephen McGuinness of the PFAI, “but clearly we need to get the league going again. The three options in terms of opening things up again seem to be playing games behind closed doors, allowing limited numbers of spectators but enforcing some sort of social distancing or just putting it back to normal. The last one still seems to be a while off, although for the moment nobody is saying any definite.”

As things stand, the league is due to resume over the weekend of June 19th but there is little incentive for clubs to start playing again if crowds are not allowed. In the meantime, a number of clubs, mainly in the first division, have stopped paying players while others, like Bohemians and St Patrick’s Athletic have sought to restructure payment so that players get all of the money they are due but over an extended period of time.

Having held off this long, the move at Rovers suggests that the club and its players don’t think any return is imminent. In a statement chairman Jonathan Roche said: “In doing what the football department have done today, this group has shown that it too shares the responsibility to safeguard and protect everything that we have worked so hard to build. We must move to protect the long-term interests and ambitions of the football club.”

Niall Quinn, meanwhile, has said that the FAI and clubs continue to work together to steer the league through the crisis. “These are challenging times for Ireland and for Irish sport with the current Covid-19 lockdown but we will do everything we can to ensure our League is ready to prosper when football returns,” he said.

The association interim deputy CEO was speaking after the association was given representation on the working group established by the clubs last summer. The group, which had included representatives from Bray Wanderers, Cork City, Derry City, Drogheda United, Dundalk, Galway United, Shamrock Rovers and Sligo Rovers, had produced an initial range of possible new structures that have become largely inactive.

Shamrock Rovers’ Noel Byrne, who chairs the National League Executive Committee, effectively the board of the League said that the move to activate the committee and include the association on it, was both “positive and progressive”.