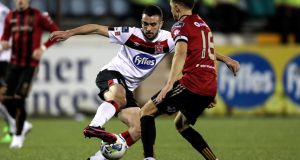 It’s looking like only a full lockdown can prevent Shamrock Rovers from winning the SSE Airtricity League Premier Division now.

One win from their remaining four matches is all that the Hoops need to clinch the title after second-placed Bohemians were held to a scoreless draw by reigning champions Dundalk at Oriel Park on Friday.

While Stephen Bradley’s men are not in action for the next couple of weeks due to a number of Covid-19 cases, it now looks certain that the league title is heading to Tallaght for the first time since 2011.

While the threat of Level 5 restrictions could yet scupper that, Dundalk interim head coach Filippo Giovagnoli said following this stalemate that he expected his side’s Europa League group stage matches, which get underway against Molde in Tallaght on Thursday, would proceed.

“I don’t have information on what will happen, we will see what the Government decide but I don’t think the Uefa matches will be affected.

“Of course though, the health of the people is the most important thing but even this is really stressful.”

Club officials say they expect the Molde game to proceed regardless of whether the country goes into lockdown or not.

On Friday the result was not much use for either side with Keith Long’s men needing all three points to keep the pressure on the Hoops and Dundalk hoping for a win to continue their push to qualify for Europe next season.

While the Louth men sit in third place with a game in hand over fourth place Waterford FC, they also have the distraction of the Europa League to contend with from next week on.

The match itself was one of few clear cut chances. The best for Bohs came after just four minutes when Keith Ward’s shot rebounded kindly into the path of Andre Wright who fired wide from close range.

Andy Lyons also forced a good stop from Gary Rogers on 40 minutes with Dundalk’s best chance coming on 55 minutes when Patrick Hoban slipped Michael Duffy in on the left only for the winger to fire agonisingly across the face of goal.

Bohs then went close again on 62 minutes when Promise Omochere’s cross was headed goalward by Wright. Ward then nipped in and looked destined to find the net but somehow Rogers kept it out.

1 Ireland, France or England? Who needs what to win the 2020 Six Nations
2 ‘This is not a personality contest’ - Jack Nicklaus endorses Donald Trump
3 America at Large: Golfers guilty of legitimising Trump’s toxic regime
4 Solskjær’s stock is on the rise again after clever squad rotation
5 Football 2020: It’s a knockout revisited – ‘You played, you lost, you went home’
Real news has value SUBSCRIBE