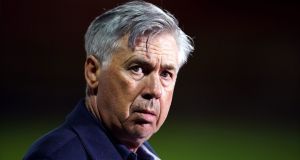 Carlo Ancelotti: Everton manager will be hoping to guide the early-season league leaders to a first win over Liverpool in 23 games. Photograph: Dave Thompson/PA

Everton are everything that Liverpool must now become.

That was the opening line of the Guardian’s report on the first match John W Henry attended as Liverpool’s owner, a 2-0 defeat at Goodison Park that left his new investment second from bottom of the Premier League exactly 10 years ago today.

The big picture can change drastically over a decade, clearly. Liverpool’s value can increase by almost £2bn and still its venture capitalist owners will push for more. Some things do remain constant in football, however – Evertonian doom in the Merseyside derby, for one. Today they hope, and with sound reason, that Carlo Ancelotti can perform his latest trick.

Henry was witness to Tim Cahill and Mikel Arteta giving Everton victory and Goodison cackling with chants of “Going down” having won the high court battle for control of Liverpool 48 hours earlier. He has not known defeat in a Merseyside derby in the 22 meetings since.

Everton’s barren sequence almost defies logic until you recall not only the sound beatings under Roberto Martínez and Marco Silva but the hard-luck tales, the self-inflicted losses and, with every passing year, the increasing anxiety that can consume players and supporters alike on derby day. Then it starts to make sense; the failures to punish 10 men, the Jordan Pickford aberration, losing in the 94th or 96th minute, being knocked out of the FA Cup by an academy team and the fear of Divock Origi.

But not today, not even against a Liverpool team perfectly equipped to remind everyone why they are Premier League champions.

“I think I’m going to sleep normally tonight because I have good feelings for the game. I have confidence,” said Ancelotti yesterday when asked whether pre-derby nerves would strike this veteran of Milan and Madrid.

“We didn’t train a lot because we didn’t have a lot of time but I see the players are focused, all fit and in good spirits. Because of this I am going to sleep for sure.”

He was equally relaxed about the terrible 10-year record.

“I think the pressure we have for this game is the pressure that we need to have to play a derby,” Ancelotti said. “What happened in the past is the past. We are living in the present and the present is tomorrow we are going to play this fantastic game, this exciting game and we have to be ready. Honestly, I don’t look at the statistics because every game is its own history.”

The 237th Merseyside derby is much-needed escapism for a city under the strictest lockdown restrictions in England and where popular local businesses are closing down with sickening regularity as a consequence.

It is arguably not the fixture Jürgen Klopp would have chosen to follow his team’s 7-2 humiliation at Aston Villa before the international break, especially with key players just returning from Covid-19 and goalkeeper Alisson injured.

But for Ancelotti’s Premier League leaders there is anticipation where usually apprehension reigns. That is a significant departure in itself, reflecting a 100 per cent start to the season over four league games and three Carabao Cup ties, although Liverpool’s visit is not merely a chance to strike a wounded rival. That situation has presented itself against lesser Liverpool teams over the past decade and yielded similar results. There is, to use the current agenda, a big picture at play for Everton.

A derby against the reigning champions offers a barometer of this season’s instant and impressive progress. As the manager said: “We are excited to play the game because our momentum is good and it could be good to play against one of the best teams in the world just to see where we are.”

Beyond the game, whether it ends with a six-point lead over Liverpool or Origi scoring the winner on his first league appearance of the season, there is opportunity in this unpredictable and turbulent Premier League campaign.

It is the opportunity to finally realise owner Farhad Moshiri’s ambitions for Everton and challenge the established order at the top of the Premier League. The window will not be open for long should the owners of Liverpool and Manchester United ultimately get their way, regardless of Project Big Picture being shelved in its original form on Wednesday.

“Honestly, I didn’t follow what was happening in the politics of football,” said Ancelotti on this week’s controversy. “I was focusing on the game. I still consider the Premier League to be one of the best competitions in the world, it is really well organised, and that’s it. I’m focused on my team and my club. We have our goal and our target for the future and that has not changed. It is always the same, and that is to be competitive until the end.”

The Italian has guided Everton to the top by doing precisely what his detractors claimed was not his forte when appointed in December. He has committed to a rebuilding project, commencing with a £60m transformation of midfield in Allan, Abdoulaye Doucoure and James Rodríguez.

All three have impressed as much as Everton’s ability to strengthen their squad while reducing the wage bill in the last transfer window, when over a dozen players left.

The club has been quick to capitalise on its high-profile South American contingent as part international expansion plans, signing a partnership deal with Chilean namesake Everton de Vina del Mar and its owners Grupo Pachuca. A first international office is expected to open soon in the United States.

Ancelotti has coached improvement from players he inherited regardless of age and position on the field. Dominic Calvert-Lewin is the obvious example with nine goals in six games at club level, including the first two hat-tricks of his career, and the striker reached double figures for the season with a goal on his England debut against Wales.

He is not the only one.

Michael Keane has looked a different player since the manager arrived, embracing responsibility. Seamus Coleman has been re-energised at 32, a welcome sight after the captain’s long recovery from serious injury. Pickford is the exception but now faces greater competition for his place in the form of deadline day signing Robin Olsen, the Sweden international.

It is early days, of course, but Ancelotti has delivered a convincing riposte to the idea he won three Champions League titles simply by massaging the egos of world-class talent.

Not that he is lacking prowess in the psychology department, however. Everton’s mentality and character were regularly called into question last season and justifiably so. Ancelotti and Coleman aired criticism themselves. So far this term, the team’s focus and response to setbacks has improved markedly. Three new midfielders alone do not account for that development.

“It’s true that the spirit and attitude has changed,” Ancelotti admits.

“There are a lot of things you have to consider; the new signings of course but also the different spirit in the players who were here last season.That started this season – a different spirit, a different attitude and a different ambition. Of course the results are helping us to keep the momentum good and I think the challenge will be when the difficulties come.

Liverpool have been the biggest difficulty of all on the pitch over the past 10 years. Break that sequence and Ancelotti will be entitled to a sleepless Saturday night.